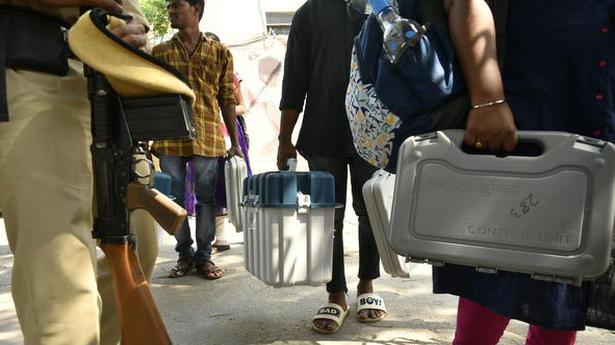 Vehicles carrying reserved EVMs and VVPATs during the seven-phased Lok Sabha polls will be mandatorily equipped with GPS to track their movement, the Election Commission has said.

The decision came in the backdrop of electronic voting machines (EVMs) and voter verifiable paper audit trail (VVPAT) machines being found in hotels, roads and even at the residence of an MLA during the assembly elections held in five states late last year.

Instructions have been issued to all State chief electoral officers to carefully monitor ‘end-to-end’ movement of all reserved EVMs and paper trail machines. For the purpose, vehicles of all sector officers carrying reserve machines will mandatorily be fitted with GPS tracking system, it said.

When incidents of “missing” EVMs were reported, the poll panel had found that in most of the cases, the polling personnel were careless and did not follow the standard operating procedure. The EC will set up nearly 10.35 lakh polling stations in the country, as compared to nearly 9.28 lakh set up during 2014 parliamentary polls. This marks an increase of 10.1%.

“The increase is largely due to rationalisation of polling stations, which the commission undertook in the recent years,” the EC said. Nearly 39.6 lakh electronic voting machines and 17.4 lakh paper trail or voter verifiable paper trail machines would be used in these polling stations. These include reserves. One control unit and at least one ballot unit where buttons are placed constitutes EVM.

Lok Sabha elections will begin on April 11 and continue for over a month till May 19 in seven phases. The counting of votes will be held on May 23, the Election Commission announced Sunday, kick-starting a mega electoral battle.

Congress leader Rahul Gandhi on Tuesday said mass testing for coronavirus infection is key to fighting its spread but the country is currently “nowhere in the game“. Stating that the country has quite a low level of testing for coronavirus infection, he said with only 149 tests per million population, India is currently in the […]

The State has a low testing rate relative to India’s avg despite cases doubling quickly in the last week Source: thehindu.com Related