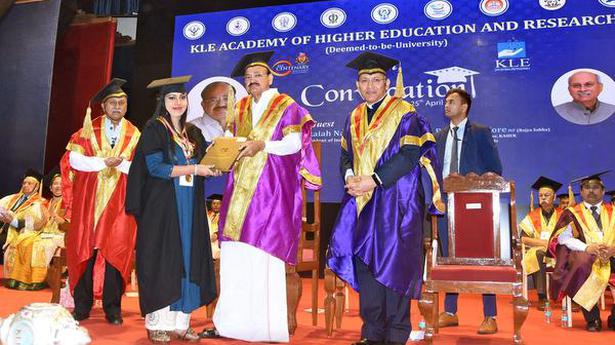 “Doctors and hospitals should not treat their profession as a money-making venture, but an opportunity to serve the poor and downtrodden,” Vice-President M. Venkaiah Naidu said in Belagavi on Thursday.

He was delivering the convocation address at the ninth convocation of KAHER, KLE Deemed to be University. He called for public-private partnership to take modern health care facilities to the rural poor.

“Innovation has led to the development of the latest diagnostic and therapeutic tools that are helping check some diseases considered incurable. But many of these technological advances are not available to a large section of the population because of the high costs. We, therefore, need to keep a balance. The challenge before all of us is to ensure that healthcare services are not only affordable but accessible to the common man. The need of the hour is for the private sector to join hands with the government in providing affordable healthcare through public-private partnership,” he said.

“Young medical graduates should be compassionate towards the downtrodden sections and treat them with empathy and understanding. They should view this profession as a mission to serving the people and not as a commercial vocation. They should strive to make high quality medical care accessible to the last poor man in the queue and to those in rural areas. The Union and State governments are creating facilities, up to the primary health centre levels in villages. The private sector should help provide advanced diagnostic and treatment facilities in rural areas,” he said. “One of the biggest concerns on the healthcare front is the rise in non-communicable diseases in India. A sedentary lifestyle, poor dietary habits, consumption of alcohol and tobacco, among others, are leading to a rise in non-communicable diseases such as obesity, hypertension, diabetes and stroke. The challenge is to arrest this rising trend and create awareness among the people, particularly the youth, on the hazards posed by modern day lifestyle,” he said.

He also expressed concern about the eroding human touch in doctor-patient relationship. “I feel that today’s doctors are not communicating adequately with patients and rather performing their duty in a mechanical fashion — probably due to work pressure. But there should be effective communication between the doctor and his patient. Patients and their families treat doctors as gods. It is quite important for doctors to always uphold the highest standards of ethics and morals. Medical courses curriculum should also include subjects such as bio-ethics, humanities and communication skills,” he said.

He favoured increased focus on prevention rather than cure. Colleges should include preventive aspects such as yoga and a healthy lifestyle in medical courses, he said.

He lauded KLE for its growth over the century into a multi-dimensional educational hub.

“This university is among the leading ones in the country in the private sector and is doing high quality research in ‘Maternal and New Born Health’. The hospitals provide high quality health in the region with over 4,000 beds, and modern laboratories. KLE has all major branches of medicine such as modern medicine, Ayurveda, naturopathy and Homoeopathy under one roof; there is need to integrate them,” he said.

“It is, therefore, possible for you to start integrative medical care and provide facilities to patients, especially from the lower economic strata,” he added.

As many as 1,011 students were awarded with degrees and 26 students received gold medals for their academic excellence.

Solani Gupta received her two gold medals in MBBS from Mr. Venkaiah Naidu. She said that she would like to serve in rural areas. She argued that the government should restrict the period of compulsory rural service for medical graduates to just one year.

Now, minor degrees in emerging technologies to be offered at engineering colleges

From this year, all engineering branches can offer courses in emerging technologies either as minor degrees or electives. The approved electives/minor degrees include artificial intelligence; Internet of Things; blockchain; robotics; quantum computing and augmented reality/virtual reality. Institutions however, cannot increase their intake for regular courses. The specialisation in emerging areas is “permitted within the approved […]

CET to begin in Karnataka on April 29

The Common Entrance Test (CET) for engineering and other professional courses in the State will begin on Monday with the biology and mathematics papers. The physics and chemistry exams are scheduled for Tuesday, while the Kannada test will be on Wednesday. The examinations were originally scheduled for April 23 and 24, but the State government […]

No cakewalk for BJP in Haryana

With the Congress in Haryana fielding “heavyweight” candidates in many parliamentary constituencies, political analysts feel that the party has conveyed a message that the electoral battle for the ruling Bharatiya Janata Party would not be a cakewalk. The BJP, after its recent win in the Jind Assembly bypoll and in the municipal polls in five […]