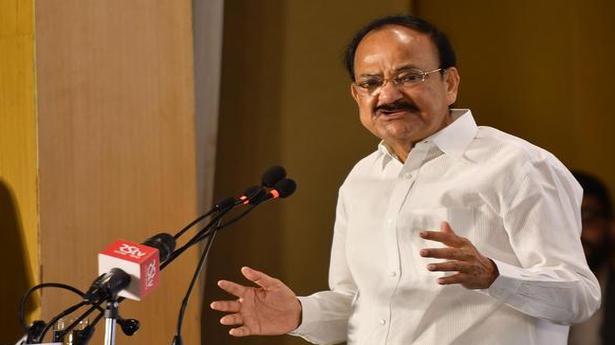 Besides inaugurating the remodelled yard at Guduru railway station, the Vice President also flagged off a new inter-city superfast express train between Guduru and Vijayawada. Mr. Naidu termed the 6.7-km-long tunnel an “engineering marvel” and said it would provide viable rail connectivity between the Krishnapatnam Port and the hinterland for the seamless movement of freight.

The tunnel, built at a cost of ₹437 crore, has 44 trolley refuges and 14 cross-passages in a horseshoe design.

“I am overwhelmed with emotion as my long-cherished childhood dream has now come true,” the Vice President said about his trip on the newly-commissioned Obulavaripalli-Krishnapatnam line on Saturday evening.

“The railway line passes through my ancestral villages where I spent my childhood. At that time, nobody imagined that one day a train would pass through these hillocks. When I was a Minister [in the erstwhile Vajpayee government] this line was envisaged, planned, surveyed and sanctioned. It is finally completed when I am the Vice President,” Mr. Naidu said.

The Vice President said his next priority would be to get the crucial Nadikudi-Srikalahasthi new railway line project completed expeditiously, as it would ensure development of the upland regions of Andhra Pradesh.

A South Central Railway (SCR) release on the occasion said the 112-km new line reduces travel time from 10 to five hours for a goods train from Krishnapatnam Port to Obulavaripalli.

It was completed at a cost of ₹1,993 crore, with nine railway stations along the route, 146 bridges, 60 road-under-bridges and two tunnels, the release said. A salient feature of the route is that the line has no level crossings, it added.

It also reduces the distance for trains coming from Guntakal Division to Krishnapatnam by 72 km and eases traffic density in the Obulavaripalli-Renigunta-Gudur section. Besides facilitating operation of freight trains on Obulavaripalli-Venkatachalam-Krishnapatnam Port route, the new line would also provide the shortest path on the Chennai-Howrah and Chennai-Mumbai rail routes, the SCR release said.

It would also ease congestion of both passenger and freight-carrying trains in the Vijayawada-Gudur-Renigunta-Guntakal sections, it said.

The State government has taken the initiative to create a broad platform of advocacy groups and NGOs to persuade the Central government to ensure adequate safeguards for vulnerable sectors in the country before signing the Regional Comprehensive Economic Partnership (RCEP), a Free Trade Agreement involving 16 nations in the Asia-Pacific region. Agriculture Minister V.S. Sunil […]

A Delhi court on September 5 granted anticipatory bail to former Finance Minister P. Chidambaram and his son Karti in Aircel Maxis cases filed by the CBI and the Enforcement Directorate. Special Judge O.P. Saini granted relief to the Chidambarams and directed them to join the probe in the cases. “In event of arrest, they […]