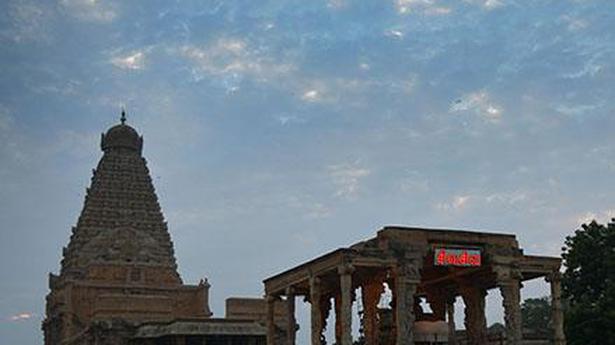 Officials of the Sri Brihadeeswarar Temple (Big Temple) in Thanjavur have dismissed as fake news a video clip in which a person alleges that some ancient Tamil inscriptions were being replaced with ones in Hindi. The video had gone viral on social media over the past few days.

Dismissing the video as nothing but misinformation, officials maintaining the World Heritage Monument said that the inscription shown in the video was actually one which is written in Nagari-style Marathi script. These stone inscriptions were installed in the Big Temple complex during the Maratha period, when the Ganesha shrine was constructed and consecrated in the complex.

While the Lord Ganesha shrine came up during Maratha period, the shrine for Goddess Brahannayagi was constructed by the Pandyas and the Subrahmanya shrine was added by the Nayaka rulers.

The Marathi inscriptions are stone inscriptions recovered while renovating the “girivalapathai” corridor of the monument, they said.

The country’s highest film honour, the Dadasaheb Phalke award, conferred for “outstanding contribution for the growth and development of Indian cinema” will be presented this year to Amitabh Bachchan. The first intimation came via a tweet by information and broadcasting minister Prakash Javadekar in which he stated that “The legend Amitabh Bachchan who entertained and inspired for two […]

Centenarian and veteran journalist Patil Puttappa, who was admitted to Karnataka Institute of Medical Sciences (KIMS) a fortnight ago, has responded well to treatment and his health condition continues to be stable. On Tuesday, Deputy Commissioner of Dharwad Deepa Cholan, Managing Director of HDBRTS and NWKRTC Rajendra Cholan and others visited the hospital and enquired […]