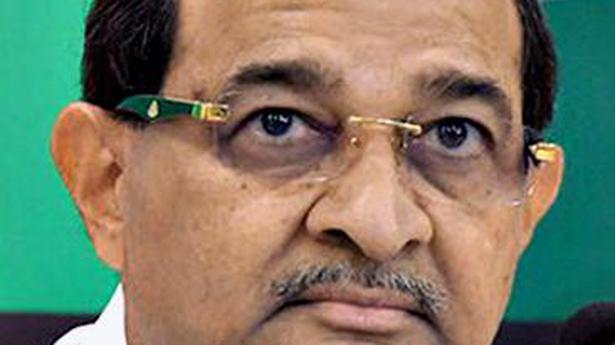 In a reshuffle that followed the expansion of the State Cabinet on Sunday, former Congressman and Leader of Opposition (LoP) Radhakrishna Vikhe-Patil was given charge of the Housing Department.

Mr. Vikhe-Patil will have the task of defending decisions taken by his predecessor Prakash Mehta, against whom he had levelled allegations of corruption. It was Mr. Vikhe-Patil who had also accused Chief Minister of corruption worth thousands of crore in preparation of the Mumbai Development Plan.

Mumbai BJP president Ashish Shelar has been given the charge of School Education, Sports and Youth Welfare, which was till now handled by Vinod Tawde. Mr. Tawde will now have the charge of Higher and Technical Education, Marathi Bhasha, Cultural Affairs, Minorities Development, Waqf and Parlimentary Affairs.

He seems to have suffered the consequences of the fiasco in SSC examinations, where internal marks were not given to students resulting in poor Class X results in State board schools. Several students’ organisations as well as Yuva Sena chief Aaditya Thackeray had complained to the Chief Minster about the matter. Mr. Shelar will now have the task to restructure the system.

Sanjay Kute will be the Minister for Labour, Vimukta Jati, Nomadic Tribes, Other Backward and Special Backward Class Welfare. Sambhaji Patil-Nilangekar held the Labour Department, while Ram Shinde was in charge of the OBC Department till now.

Suresh Khade will be the new Social Justice Minister in place of Rajkumar Badole, while Anil Bonde will take over as Agriculture Minister — a post left vacant after the death of Pandurang Fundkar last year.

Yavatmal’s BJP MLA Ashok Uike will be the new Tribal Development Minister in place of Vishnu Savra, while the Sena’s Tanaji Sawant has been given the responsibility of the Water Conservation Department, which was earlier with Mr. Shinde.

Another turncoat — former Nationalist Congress Party leader Jaydutta Kshirsagar who joined the Shiv Sena during the Lok Sabha polls — will be the new Minister for Employment Guarantee Scheme and Horticulture.

Thus, despite getting two Cabinet berths, the Sena could not get any important department.

Portfolios of existing Cabinet ministers have also undergone a reshuffle. Mr. Patil-Nilangekar will now be Minister for Food and Civil Supplies and Consumer Protection, Skill Development and Ex-Servicemen Welfare. Jaykumar Raval will be in charge of Food and Drug Administration, Tourism and Protocol. Cooperation Minister Subhash Deshmukh has been given the additional responsibility of the Relief and Rehabilitation Department.

Among Ministers of State, Yogesh Sagar is the new MoS Urban Development, while Avinash Mahatekar is the MoS Social Justice and Special Assistance.

The verdant Seshachalam hill ranges known for their lush green forests are home to rare flora and fauna, which are a visitor’s delight. The camera traps installed at various places by the Tirumala Tirupati Devasthanams’ (TTD) Forest Department have captured the rare and endangered animals such as four-horned antelope (Konda Gorre), Asian palm civet (Punugu […]

A team of police led by ADGP, law and order, Amar Kumar Pandey brought fugitive underworld operative Ravi Pujari from Senegal on Monday. The gangster was nabbed in South Africa and was later extradited to Senegal, police sources said. Pujari, handcuffed, escorted by a team of officials landed at the Kempegowda International Airport from where […]

Over 250 were transported on six buses on Wednesday evening Source: thehindu.com Related