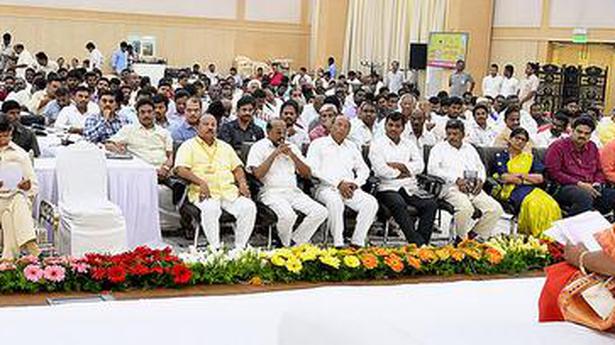 “I have the satisfaction of doing more than what I had promised in 2014,” Mr. Naidu said while addressing a series of public meetings at Kandukur, Chimakurthy and Chirala in Prakasam district on Saturday.

With just five days to go for the elections, Mr. Naidu, in a voice filled with emotion, said, “I have no personal desires. I will take responsibility for your future. It is up to you to decide whether you want a person with a vision to usher in all-round development or an Opposition leader, who is an accused in 31 criminal cases and lacks administrative experience.”

“As many as 95 YSRCP MLA and 12 MP candidates have criminal cases pending against them,” he said.

“Do you want such persons as lawmakers?” Mr. Naidu asked, and the assembled crowd roared by saying “no.”

“Water supply for irrigation in 42 lakh acres will become uncertain if Mr. Jagan Mohan Reddy wins because he takes orders from Telangana Chief Minister K. Chandrasekhar Rao, who has dragged Andhra Pradesh to court on the Polavaram project and other projects designed to utilise the flood waters of the Krishna. Mr. Rao has never openly declared his support for Special Category Status to Andhra Pradesh,” Mr. Naidu said.

“It is unfortunate that YSRCP president is backing Prime Minister Narendra Modi, who betrayed the State, only to wriggle out of court cases,” he said.

“Whether the Centre cooperates or not, I will ensure water by gravity from the Polavaram project and go ahead to complete the inter-linking of the Godavari and the Penna to drought-proof the State,” Mr. Naidu asserted.

Accusing the Centre of misusing institutions such as the CBI, the ED and the Income-Tax Department to conduct raids on the TDP leaders, he lauded TDP Nellore MP candidate B. Mastan Rao and Kandukur candidate P. Rama Rao for boldly facing the I-T raids.

‘Teach them a lesson’

“TDP should retain power to generate more jobs,” he said amid loud cheers.“DWCRA women will be given ‘Pasupu Kumkuma’ benefits every year for the next five years. Women will be given ₹18,000 each per annum for sending their children to school under the ‘Ammaku Vandanam’ scheme,” said.

He assured the ₹4,400-crore Ramyapatnam sea port would be completed in two to three years. Similarly, Asia’s biggest paper mill would also come up in the district. The VANPIC sea port project with ship-building industry would also be revived, he added.

The central drug regulator has given its go-ahead to a proposal by the Indian Council of Medical Research (ICMR) for the clinical trial of convalescent plasma in COVID-19 patients, as per the protocol developed by ICMR. The Drug Controller General of India said ICMR has submitted a list of institutes, which have shown an interest […]

The payment of power bills by domestic consumers for March, which expired on Wednesday, was abysmally low, thanks to the impact of coronavirus and lockdown. Senior power officials said the collections State-wide were less than 25%. The two power distribution companies in the State had appealed to the electricity regulator to be allowed to stop […]