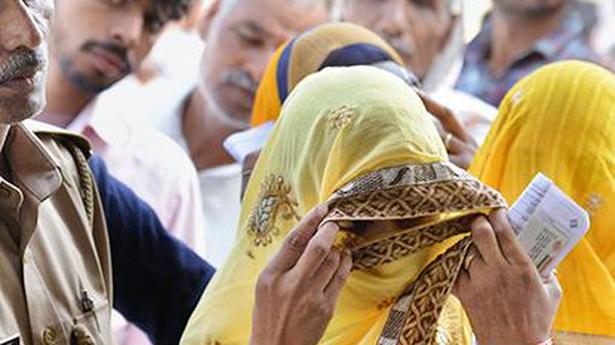 From unemployment among the youth and lack of development on one side to nationalism and making sure Prime Minister Narendra Modi retains his post on the other, Mathura voters were split on issues that were foremost on their minds as they cast their votes in the Lok Sabha election on Thursday.

Among those lined up to cast their votes early in the morning in Diwana Kalan village in Mathura was Jitender Chauhan, a farmer. “I’ve never seen Hema Malini in Mathura. She just drove past our villages, we heard. As for the BJP, their promises have turned out to be lies,” he said, questioning her track record over the past five years..

Another voter in the village, Anita, a self-employed tailor, said the benefits of many of the BJP government’s schemes had not reached people like her. “We haven’t got money to build toilets or homes. Forget about latrines, we did not even get the cooking gas cylinders promised,” she said.

For many young voters in the constituency, the problem of unemployment is serious. Chand Prakash said he had been forced to take tuition classes off and on and help his family with farming after failing to get a teaching job, having completed a Bachelor’s in Education in 2015. “Whether it is the Modi government or the Yogi government in U.P., there has hardly been any hiring. And when some vacancies do come up, the government officials demand money to give the job. How can we afford that?” he asked.

In the heart of Mathura town, however, supporters of the BJP said their vote was to make Mr. Modi the Prime Minister again.

Dilip Chaturvedi, a priest at the Krishna Janambhoomi Temple, said: “The biggest achievement in the five years is that that Hindus are holding their head high. When it comes to promises made by Mr. Modi, we have to remember that if you plant a tree, it takes time for it to provide shade. He has done in five years what others had not in decades.”

Guddu Chaudhary, a taxi driver, added: “We are very happy with Hemaji. People are supporting the BJP to make Modi the PM.”

Munni, a senior citizen who runs a tea shop outside the Krishna Janambhoomi Temple, said the only thing she liked about Mr. Modi was that “he made the rich come down to the level of the common man. Those who ran away with banks’ money are now facing justice”. “But, nothing has changed in my life. No one can rid me of my poverty, whether it is Mr. Modi or anyone else. The government may give houses to women, but when their husbands and sons are roaming around looking for jobs, how will they run those houses,” she asked.

Across the road from the temple, along a railway track, a small colony of mostly Muslim residents lives amid piles of garbage and animals running around. Asamuhammad, who works as a daily wager painting and constructing houses, said: “When people don’t have money to build houses, our work stops. We are only making rotis at home, no sabzi.”

Watch | Save the Indian Mango: How farmers are hoping to tide over COVID-19 crisis

India is a leading producer and exporter of mangoes. The country grows about 1,500 varieties and exports nearly 50,000 tonnes of mangoes annually. Also read | How Dapoli’s Noshirwan Mistry is planning to save this year’s mango harvest Rare varieties such as Azam-us-Samar are sent from the Nizam’s family in Hyderabad to Queen Elizabeth. Mallika, […]