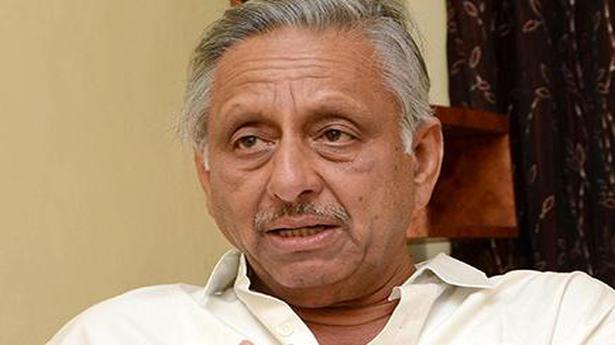 After months of silence, Congress leader Mani Shankar Aiyar was back in the news on Tuesday with an article justifying his neech aadmi jibe against Prime Minister Narendra Modi, and also calling him the most “foul-mouthed” prime minister the country has seen.

The article, published in Rising Kashmir and The Print, drew sharp retorts from the Bharatiya Janata Party, which called him “abuser-in-chief” and described his party as arrogant.

In the article, Mr. Aiyar also slammed Mr. Modi on a series of issues and asked, “Remember how I described him on 7 December 2017? Was I not prophetic?”

In 2017, the former Union minister called Mr. Modi “neech aadmi” following which he was suspended from the Congress party.

Justifying that comment, Mr. Aiyar said in his article, “Modi will, in any case, be ousted by the people of India on 23 May. That would be a fitting end to the most foul-mouthed prime minister this country has seen or is likely to see.”

“… Aiyar then apologized & hid behind poor Hindi excuse. Now he says he was prophetic. Congr revoked his suspension last year for filthy outburst. Double speak & arrogance of @INCIndia on display again!” he said.

“Pak-crony Aiyar has the audacity to call PM ‘anti-national’ Nation knows that @narendramodi ji is the epitome of ‘Rashtra Bhakti’ Aiyar is known for ‘Parivar Bhakti’ as a (political) slave of the dynasty. It isn’t surprising at all that all abusers are close Gandhi confidants.”

BJP’s IT Cell head Amit Malviya also referred to Congress leader Sam Pitroda, in the spotlight for his “hua to hua” remark on the 1984 anti-Sikh riots.

“Upset that Sam Pitroda was getting all the attention, the irrepressible Mani Shankar Aiyar pulls Pitroda’s foot out of his mouth and puts it in his…Reiterates and justifies his ‘Neech’ comment for PM!” he said on Twitter.

Congress distances itself from Aiyar’s remarks

The Congress distanced itself from Mr. Aiyar on Mr. Modi saying it is his personal opinion.

Congress spokesperson Jaiveer Shergill said his party is not on the back foot regarding Mr. Aiyar’s remarks, instead it should be Mr. Modi who should be ashamed for his remarks on former prime minister Rajiv Gandhi and UPA chairperson Sonia Gandhi.

“Mani Shankar Aiyar’s remarks are his own as stated by him in his article. The Congress is neither on the back foot nor ashamed of his remarks. It’s the PM who should be ashamed for lowering the dignity of the office he occupies by making disparaging remarks against former PM Rajiv Gandhi and former Congress President Sonia Gandhi.

“The PM should apologise to the country for the abusive language that he has used,” Mr. Shergill said, referring to Mr. Modi recently saying Rajiv Gandhi’s life ended as ‘Bhrashtachari No 1’ (corrupt number 1).

Modi loathes Nehru because he wanted to pull Indians out of superstition: Aiyar

In the article, Mr. Aiyar said he has found out why Mr. Modi “loathes” Jawaharlal Nehru so much — because Nehru had a degree in Natural Sciences from the University of Cambridge, and was convinced that to pull Indians out of superstition, modern India must cultivate a scientific temper .

This, Mr. Aiyar said, drives Hindutva supporters “nuts because they like to believe the udan khatolas of mythology were the earliest F-16s to be invented by Hindus, and that Hindu plastic surgery, not a transplant operation, is what led to an elephant’s head surmounting Lord Ganesh.”

“Both these stunningly illiterate claims come from the mouth of none less than the Prime Minister of our country, whose acquaintance with higher education has gone no further than lying about degrees from Delhi and Gujarat universities that he never got and who can obviously not tell a scientific proposition from a ‘dhokla’,” Mr. Aiyar wrote.

He also referred to Mr. Modi’s recent comment that he ordered the Indian Air Force to strike at Balakot despite heavy cloud cover because he believed that heavy cloud cover at the time would allow Indian jets to evade Pakistani radar.

“This is to insult our brave airmen and, above all, the Chief of Air Staff. Not one of them was so ignorant of the fact that radar is not a telescope whose vision can be clouded over. Radar is used precisely because, whatever the weather conditions, it can pinpoint incoming aircraft,” Mr. Aiyar asked.

“Did Modi take his senior-most Air Force officers for fools that he could trot out such ridiculous unscientific rubbish before them? And were they so pusillanimous that they dared not correct such a vacuous Prime Minister?” he wrote in the article, which comes as the long-drawn election process draws to a close with the final phase of voting scheduled on May 19.

Mr. Aiyar wrote that Mr. Modi needs to be warned that he is “guilty of anti-national activity in trying to ride on the sacrifices of our army and CRPF martyrs in a dirty election campaign; of defaming the Indian Air Force by portraying them as complaisant idiots in his scientific illiteracy.”

School Education Principal Secretary B. Rajasekhar, who assumed office as the Vice-Chancellor (FAC) of Sri Krishnadevaraya University on Saturday, asked the university’s Academic Senate members to concentrate on improving the quality of academics on the campus. In a day-long meeting attended by members of the Academic Senate, Boards of Studies, and deans of different departments, […]