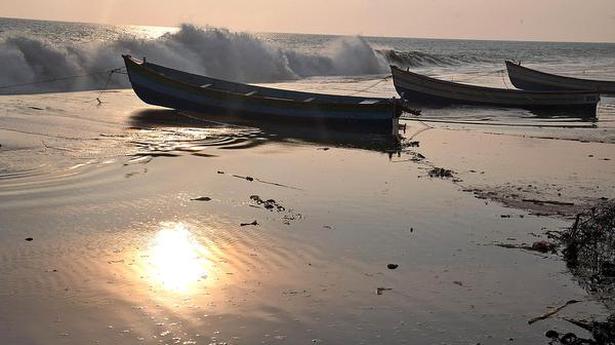 Rough seas battered coastal areas in the district on Wednesday even as the India Meteorological Department (IMD) and Indian National Centre for Ocean Information Services (INCOIS) warned that high swells are likely to lash the Kerala coast till Thursday night.

Nearshore sea will be rough till 11.30 p.m. on Thursday due to the effect of high-period swell waves that could reach heights of 1.7-2.5 metres, INCOIS says. In Thiruvananthapuram district, two houses were partly destroyed in Valiathura by the invading waves.

The occupants have shifted to the houses of relatives. The Deputy Collector (Disaster Management) visited the region, even as a warning has been issued that the sea will continue to be rough and more areas may be affected.

Other coastal areas including Shanghumughom and Kadinamkulam also were lashed by high swells on Wednesday. Fishermen have been warned to watch out for squally weather over equatorial Indian Ocean region adjoining the southwest part of Bay of Bengal. A low pressure area is likely to develop over this region by Thursday. The squally weather is likely to cause wind speeds touching gale force by Sunday. Fishermen in deep sea in these areas have been advised to return to the nearest coasts by Saturday.

At coastal Anchuthengu, a man sustained injuries after a wall, battered by the waves, collapsed on him. He was identified as Yesudasan, of Kochumethankadavil.

It is Siddaramaiah who is ‘nalayak’,says Shobha Karandlaje

The former Chief Minister Siddaramaiah has lost his mental balance. He should be admitted to NIMHANS if the Congress-Janata Dal(S) coalition had to be saved in Karnataka, the former Minister and BJP leader Shobha Karandlaje said in Chikkodi on Sunday. She was responding to reports that Mr. Siddaramaiah had described Prime Minister as unworthy (”nalayak”) […]

The Congress in Assam sounded the poll bugle with a rally against the Citizenship (Amendment) Act (CAA) in Nagaon district on Sunday. The elections to the 126 Assembly seats in the State are a little more than a year away. The Bharatiya Janata Party (BJP), which leads the three-party government in Assam, had claimed it […]