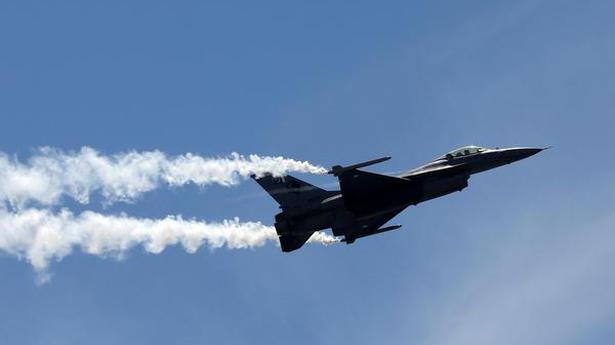 The Indian Air Force (IAF) on Monday presented two radar images of the engagement with Pakistan Air Force (PAF) on February 27 to prove that a Pakistani F-16 was shot down by a MiG-21 piloted by Wing Commander Abhinandan Varthaman.

“The IAF has irrefutable evidence of not only the fact that F-16 was used by the PAF on February 27 but also that an IAF MiG-21 Bison shot down a PAF F-16,” Air Vice Marshal (AVM) R.G.K. Kapoor, Assistant Chief of the Air Staff, Operations (Space), told the media. The images were redacted to avoid revealing certain details for security reasons.

The images from the Airborne Warning and Control System (AWACS) show the tracks of the PAF jets and one IAF jet in combat and in the second image, one of the PAF jets disappears. “In the combat that followed, one MiG-21 Bison of the IAF piloted by Wing Commander Abhinandan Varthaman shot down one F-16 of the PAF,” AVM Kapoor said.

Analysis of electronic emissions have shown that the aircraft picked up by the ELINT intercepts from AWACS and radio transcripts indicated F-16s in the area directly in front of Wg. Cdr. Varthaman’s aircraft, he stated.

The F-16 crashed and fell across the Line of Control (LoC) in Pakistan-occupied Kashmir (PoK). Indian Army posts in the vicinity of the LoC in Jhangar sector have visually sighted two separate parachutes, AVM Kapoor said. The first was due west, in Sabzkot area and second was, after few minutes, southwest, in Tandar area. The two areas are separated by approximately 8-10 km.

AVM Kapoor added that the IAF had more credible information and evidence clearly indicating that the PAF had lost one F-16 in the combat. “However due to security and confidentiality concerns, we are restricting info being shared in the public domain,” he added.

Pakistan, which has denied losing any F-16, has released an image showing four missiles which, it claimed, shows that the MiG-21 flown by Wg. Cdr. Varthaman did not fire any missiles.

However, IAF officials refuted this and pointed to the fact for one of the missile in the picture, only the front seeker and the end tail portion were seen. “It is because the missile had impact and detonated due to which the explosive was destroyed,” said an IAF officer.

Last week, American magazine Foreign Policy quoted an unnamed U.S. defence official as saying that the U.S. had physically counted PAF F-16 planes and “all aircraft were present and accounted for”. However, responding to questions on the issue, a U.S. Defence department spokesperson said they “weren’t aware” of any such investigation.

The Council was adjourned for the second consecutive day on Friday over State government’s “failure” to give reservation for the Dhangar (shepherd) community, and address the issue of corruption by Cabinet ministers. Like Thursday, the House was adjourned three times before continuous pandemonium forced the chairman to call off the proceedings for the day prior […]

Uttar Pradesh Chief Minister Yogi Adityanath on Monday recommended Governor Ram Naik to sack Om Prakash Rajbhar from his Cabinet with “immediate effect.” Mr. Rajbhar holds the Backward Classes  portfolio in the Yogi Adityanath government. This came a day after Mr. Rajbhar, an ally of the BJP who has turned rebel, predicted the party would […]