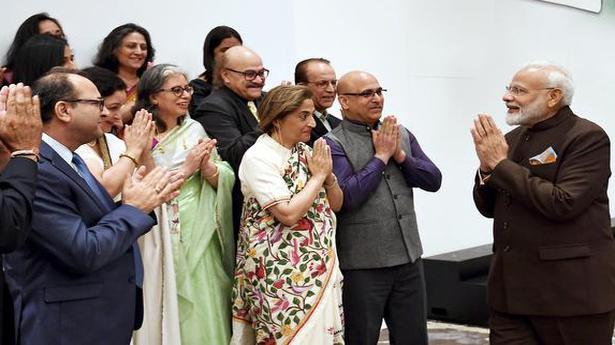 Prime Minister Narendra Modi had a “special interaction” with a 17-member delegation of Kashmiri Pandits here and assured them of “building a new Kashmir” which would be for everyone.

The delegation, which included Kashmiri Pandits from across the United States, met Prime Minister Modi on his arrival in Houston as part of his week-long visit to the U.S.

“Kashmir mein naee hava bah rahee hai [New winds are blowing in Kashmir]. We will all build a new Kashmir together that will be for everyone,” he told the delegation.

The Indian government on August 5 revoked the special status given to Jammu and Kashmir and bifurcated it into two Union Territories.

Mr. Modi also thanked the community for their patience for over 30 years. “I had a special interaction with Kashmiri Pandits in Houston,” Prime Minister Modi later tweeted.

Earlier, MEA Spokesperson Raveesh Kumar tweeted that the Kashmiri Pandits expressed support for the steps taken by the Indian government for the progress of India.

“In Houston, a delegation of the Kashmiri Pandit community met the Prime Minister. They unequivocally supported the steps being taken for the progress of India and empowerment of every Indian,” he tweeted.

The delegation thanked the Prime Minister for the move and said that their 700,000 community members were “indebted” to his government.

The delegation also presented a memorandum to Mr. Modi, requesting him to set up a task force under the Home Ministry to bring the community together, develop the region and repatriate Kashmiri Pandits.

Lalit Kaul from Boston and a part of the delegation, said, “It was gracious of Prime Minister Modi to meet us and acknowledge that our community has suffered a lot. His assurance that he is on the job and things will improve gave all of us renewed hope.”

Another Kashmiri Pandit delegate from New Jersey, Rakesh Kaul said that meeting Mr. Modi was important to request him to initiate steps which will address the ethnic cleansing of Kashmiri Pandits.

The Prime Minister also met a delegation of the Dawoodi Bohra community. The members felicitated him with a shawl.

“The Dawoodi Bohra community has distinguished itself across the world. In Houston, I had the opportunity to spend time with them and speak about a wide range of issues,” Mr. Modi tweeted.

The delegation members recalled Mr. Modi’s visit to Indore last year to attend a programme of their community and also highlighted his association with Syedna Sahib.

Members of the Sikh community too met Mr. Modi on his arrival in Houston.

“I had an excellent interaction with the Sikh Community in Houston. I am delighted to see their passion towards India’s development!” Mr. Modi tweeted.

The MEA spokesperson said the Prime Minister interacted with the members of the Sikh community, during which they congratulated him on some of the path-breaking decisions taken by the Indian government.

All the three fronts are claiming advantage over the increase of 5.69 percentage points in voting in the Thrissur Lok Sabha constituency, which witnessed a triangular tussle this time. The United Democratic Front, Left Democratic Front, and National Democratic Alliance camps are busy evaluating various socio- politico- religious factors that contributed to the high voter […]

You are responsible for unfortunate situation in Punjab, Nadda tells Amarinder

You are not performing the role expected of you and your government, says BJP president Source: thehindu.com Related