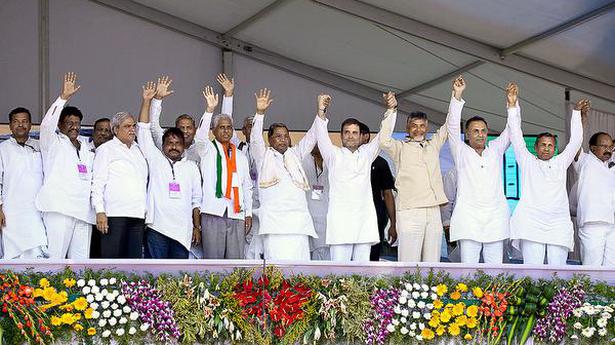 In a sharp response to BJP leaders who termed the minimum income guarantee scheme (NYAY) promised by the Congress as something that could not be implemented, Congress president Rahul Gandhi hit back stating that his party, upon coming to power, would forcibly take money from the pockets of big businessmen who looted the country under Prime Minister Narendra Modi’s rule and put it into the bank accounts of poor people. He was addressing a public rally jointly organised by the Congress and the Janata Dal(S) here Friday.

“When we promised NYAY, the BJP and Mr. Modi started asking from where we will mobilise money for the scheme. Whenever we come up with any pro-people programmes, they ask from where we would bring the money for them. Now, I tell you that the money for the scheme meant for the 20 % of the poor will not come from the pockets of the middle class. Instead, we will, soon after coming to power, forcibly take the money from Ambani, Choksi, Mallya and others who looted the country and put it in the accounts of the poor [through NYAY],” he said, referring to industrialists Anil Ambani, Vijay Mallya and Mehul Choksi who are allegedly involved in different scams.

Terming the scheme as very much implementable, Mr. Gandhi said that his party would show Mr. Modi that it would be possible to spend ₹ 3.60 lakh crore every year for the scheme.

“Mr. Modi has promised that he would bring back Indian black money from abroad and distribute ₹ 15 lakh to each individual in the country. But, he did not fulfil it. We have promised to pay ₹ 72,000 every year to 5 crore families [20% of the poorest population] and we would fulfil it and show him [Mr. Modi],” he said.

Countering the Modi regime on the promise of employment generation, the Congress president said that the BJP’s promise to generate two crore jobs every year turned out to be a hoax. “Forget about generating new jobs, the Modi rule destroyed existing jobs. Just as we come to power at the Centre, we would fill 22 lakh vacancies [in the Union government departments],” he said.

Review of lessons on Tipu only after report: Education Minister

A day after Chief Minister B.S. Yediyurappa dropped hints that lessons on 18th century Mysuru king Tipu Sultan would be dropped from the State syllabus textbooks, Minister for Primary and Secondary Education S. Suresh Kumar said a decision would be taken only after the textbook committee submits a report on the issue. Mr. Kumar told […]

The share of stubble burning in Delhi’s pollution has risen to 35%, the season’s highest, and the hazardous haze shrouding the city on Wednesday can be “purely” attributed to it, said the Ministry of Earth Sciences’ air quality monitor SAFAR. Extremely calm surface winds on Tuesday night aggravated the problem, it said. Northwesterly winds, which […]