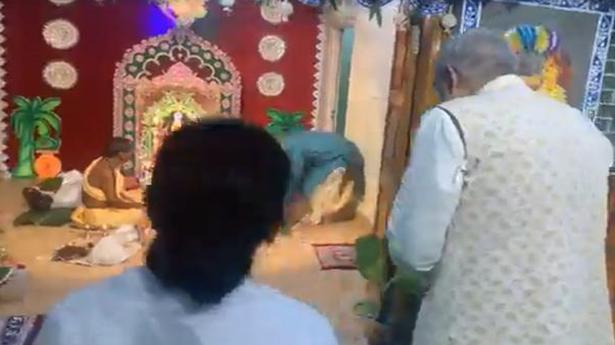 Amid the ongoing war of words between the Trinamool Congress government and Raj Bhavan, West Bengal Governor Jagdeep Dhankhar along with his wife visited to Chief Minister Mamata Banerjee’s residence to attend Kali Puja and spent around two hours there.

“I am glad to be here. Met several people. I heard that the songs that are being played here have been written by the chief minister herself. I requested her to give me a CD of her songs,” Mr. Dhankhar said.

Dressed in an off-white kurta-pyjama set and a sleeveless jacket, the governor also interacted with senior Ministers and Trinamool leaders who attended the puja.

He even hugged state Parliamentary Affairs Minister Partha Chatterjee. There have been numerous run-ins between the governor and Mr. Chatterjee, also the Trinamool secretary-general, in recent times.

The Chief Minister had invited the Governor to her south Kolkata residence on the occasion of Kali puja, after he had expressed his desire to visit her home during Bhatri Dwitiya or Bhai Dooj.

Later, Ms. Banerjee wrote to Mr. Dhankhar inviting him to attend the 40-year-old Kali Puja at her residence in Kalighat.

Mr. Dhankhar, who took oath as the Governor of West Bengal on July 30, had been at loggerheads with the State government over several issues — ranging from his seating arrangement at the Durga Puja carnival to security upgrade — since he rushed to Jadavpur University on September to “rescue” Union Minister Babul Supriyo, who was being “heckled” by a section of students.

A controversy had erupted on October 25 after a Trinamool leader, who was the chief patron of a club in Barasat near Kolkata, stepped down from the post after it invited the Governor to inaugurate the Kali Puja.

Sunil Mukherjee, the chairman of Trinamool-run Barasat Municipality, had said he was unhappy with the club’s move as the “Governor had a bias against the State government”.

A bike rally promoted by the Indian Epilepsy Association and Avitis Institute of Medical Sciences (AIMS) from Kochi to Bengaluru passed through Palakkad town on Thursday, spreading the message of wearing helmet. Assistant Superintendent of Police Swapnil M. Mahajan flagged off the rally after it received a reception at Avitis Hospital here. Popular Bullet rider […]

When popular Malayalam actor Indrans sits seriously before the sewing machine and carefully sews quality cloth masks with ease, it was not acting or becoming part of the Kerala government’s anti-COVID-19 campaign for him, but going back to his own roots. He explained the nuances of stitching and shared tips on how to bring out […]