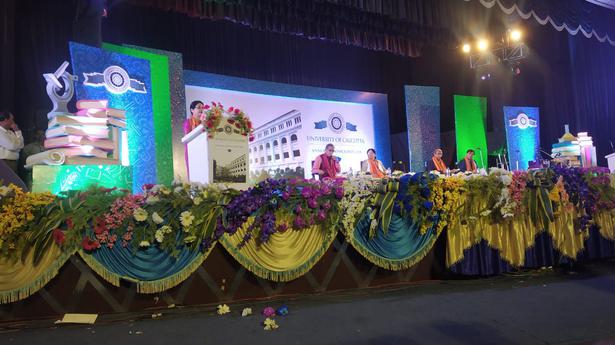 Students of Calcutta University have delayed the convocation programme on January 28 by protesting against West Bengal Governor Jagdeep Dhankar. The students surrounded the Governor’s car, forcing him to wait before he was taken inside the auditorium with a police escort.

“Scores of students appeared, they surrounded his car and started shouting slogans,” a police official posted at the spot said.

However, he could not be taken to the stage as students inside the auditorium began shouting “go back Governor”. The police and Governor’s security surrounded Mr. Dhankar, and he is presently waiting in a room behind the main stage.

The main stage has been cordoned off by the police, an eye witness said. The protest is continuing and the students said that they “would not let the programme start, unless the Governor returns”.

The students are carrying posters and placards opposing Citizenship Amendment Act (CAA) and National Register of Citizens (NRC). The students supposed to receive their degree have already arrived with other invited guests. Nobel laureate Abhijit Banerjee is expected to deliver the convocation address.

The Vice Chancellor of the University Sonali Chakravarty Bondhopadhyay has appealed to the students: “Abhijit Binayak Banerjee has come from a long distance to receive the university’s D. Litt today. If you calm down then only we can honour him, otherwise it is not possible for me to conduct the programme.”

The Governor could not go onstage and, and returned without conferring D. Litt to Dr. Banerjee. The VC will now confer the D. Litt.

A spectator was gored and at least 12 people, including six bull tamers and two policemen, were injured in the manju virattu organised at Irumathi village, near Devakottai on the occasion of Maha Shivaratri on Wednesday evening. The police said, C. Mani, 48, was among the 6,000 spectators who came to witness the event at […]

Prime Minister Imran Khan of Pakistan will be invited to participate in the Heads of Government Council meeting of the Shanghai Cooperation Organisation (SCO) that will be hosted in India this year, the Ministry of External Affairs said on Thursday. The invite move came hours after the UN Security Council discussed the situation in Kashmir. […]