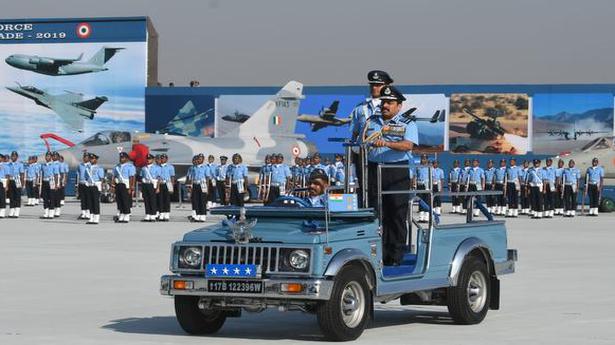 Wg. Cdr. Abhinandan Varthaman, who was awarded Vir Chakra for shooting down a Pakistani F-16 during Balakot air strike, led a Mig-21 Bison formation at the Air Force Day parade on Tuesday.

The Air Force Day flypast to mark the 87th Air Force Day celebrations also saw other pilots who took part in the Balakot air strike and were recently given Gallantry awards.

IAF chief R.K.S. Bhadauria decorated the 51 Squadron and the 9 Squadron for their role in the air strike on terrorist camps in Pakistan’s Balakot in February.

IAF personnel who were part of the Balakot air strike and the air engagement a day after in February were earlier awarded gallantry medals on the eve of Independence Day. Wg. Cdr. Varthaman, who was caught by Pakistan after his MiG-21 Bison fighter jet went down across the Line of Control (LoC) on February 27 and was returned three days later was awarded Vir Chakra (VrC), the country’s third-highest gallantry award.

Every year, the Air Force Day is celebrated at Hindon base in presence of the IAF chief and senior officials of the three armed forces.

The IAF was founded on October 8, 1932, and the force has participated in several crucial wars and landmark missions.

Son of the Soil | The Innovators

V.G. Lakshmipriyan is still cashing in on the time he spent at Bharti Walmart from 2010 to 2014. Taking cue from the initiatives connecting farmers to Walmart stores, he launched FarmFolks in 2015 to provide farmers, particularly the banana growers in Mysuru region, critical quality inputs for their produce. FarmFolks guides farmers through their crop […]

When it comes to having industrial infrastructure such as land, power and water that meets future requirements, the ability to overcome transportation hassles and absorb the ever-growing population, Visakhapatnam and Sri City top the chart in the State. “In fact, the two are more future ready than other cities,” observes Andrew Fleming, British Deputy High […]