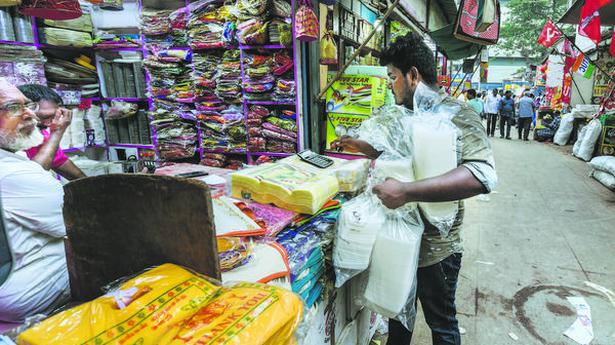 A blanket ban across Tamil Nadu notwithstanding, plastic commodities like carry bags, single-use cups and straws have silently crawled back into the market again. Members and officials of various plastics associations insist that they are strictly following the guidelines laid down by the Tamil Nadu government while manufacturing plastics and allege that the banned products are creeping in from neighbouring States.

Irrespective of the source of these plastic products, the current situation in Tamil Nadu also points to lax implementation of the ban.

“Despite the ban, people are buying plastics from other States. This has created an illegal market for single-use plastic products,” B. Swaminathan, Chairman-Environment Committee, The Tamil Nadu Plastics Manufacturers’ Association (TAPMA), pointed out. A fairly robust one at that, an investigation on the ground reveals.

The State government enforced the ban on single-use plastics with effect from January 1. The announcement regarding this was made in June 2018, by Chief Minister Edappadi K.Palaniswami in the Assembly. “Let us gift a plastic-free Tamil Nadu to the future generation,” he had said.

TAPMA sources who sought anonymity said that plastics are coming into the State from Maharashtra, Daman and Diu. This is how the network is operated – the plastics are not stocked in godowns. Instead they are directly distributed to the retailers in small vehicles. These products are sold at a higher price too. Along with these plastics, fake products claiming to be recyclable plastics are also entering theState, the source added.

The government was closely monitoring the usage of plastics and conducting surprise checks until the announcement of Lok Sabha elections.

S. Mani, who runs a small shop in T. Nagar, explained that government officials frequented shops regularly in the first three months of the ban. Once election work began, everything changed. Mani and other shopkeepers in his locality said that consumers were also to blame. “If we don’t give them a carry bag they immediately go to other shops which give them one. Customers don’t carry their bags at times and they also don’t want to spend money buying bags, though the actual prices are very affordable,” Mani added.

A vendor at the T. Nagar vegetable market said that business has shrunk for many shopkeepers at the market after the plastic ban. “Consumers like it when the vegetables are packed in plastic carry bags. It is easy for them to carry and store in the refrigerator,” he said.

Even The Tamil Nadu State Marketing Corporation Limited (Tasmac), which had bid farewell to plastic cups, is now once again embracing them. Over 80,000 plastic cups are used at Tasmac shops across the State every day. A Tasmac employee said, “We were giving glasses but maintenance was a concern. On an average 5-10 glasses break each day. The math did not work well so some shops started using banned plastic cups,” he said. The absence of punitive action for doing so emboldened them to continue to use plastic cups.

Till date, over 200 tonnes of banned plastics have been seized in the 426 sq. km that constitutes the area under Chennai Corporation. The Corporation has announced that officials will cancel trade licences of traders who found violating the ban. The civic body has used the seized plastics for relaying roads, officials claimed.

In the temple city of Madurai, single-use plastics reportedly crept back into the city during the Chithirai festival. People dumped several plates and cups made of non-biodegradable single-use plastic during the season. City Health Officer-in-Charge M. Saroja said that they had already conducted several raids to ensure that plastic sales were under control during the festival. Corporation Commissioner S. Visakan said, “A few days ago, a sanitary officer from Zone 2 seized a total of 250 kg of plastic from the flower market and fined shopkeepers ₹7,500. Whenever we get a tip-off, we immediately conduct raids,” he added.

Like Madurai, Hosur has also witnessed a surge in the use of plastics in the last few days. The election season witnessed a high quantum of plastic waste generation during rallies, and campaigns. Suddenly, water packets and plastic flags found their way into the public domain. With the focus on model code violations, there was little or no manpower to monitor the ban.

In Coimbatore, rampant usage of plastic is in evidence seen at Big Bazaar Street. A few eateries at Palladam in Tiruppur district are packing food in plastic pouches. Data shows that raids by Coimbatore Corporation officials starting April 22 had resulted in seizures of more than 700 kg of plastics and fines to the tune of ₹3.5 lakh had been slapped. The Corporation officials in Coimbatore said that while they were busy with the polls a few wholesale traders had duped gullible grocery store owners and other retailers by telling them that the government had not prohibited the use of plastics. The retailers who used the plastics for packing goods were eventually caught.

Similar is the case in Tiruchi. Wholesale merchants on Peria Kammala Street and Allimal Street in the city continue to sell banned plastic products. “We conduct surprise raids once a week and have collected fines to the tune of ₹5.75 lakh up to April 30, mostly from wholesale merchants, for possessing banned plastic products,” Tiruchi Corporation Commissioner N. Ravichandran said.

Since January, the Salem Corporation has raided 2,422 shops and seized 10,517 kg of banned plastic items. Based on the seizures, the Corporation has till date imposed a fine of ₹5.71 lakh.

Compared to other parts of the State, the plastic ban has been enforced quite strictly in the Nilgiris. M. Ilyas, a shopkeeper on the outskirts of Ooty, said that almost all shopkeepers in the district had stopped packaging products using plastic bags. “Since the ban on plastic has been in force in the Nilgiris for longer than in most other parts of the State, locals and tourists seem to be more accepting of the rules,” he said.

In the Nilgiris, a total of 99.94 kg of banned plastic items have been seized since January 1. Fines amounting to ₹2.27 lakh have been collected from both tourists as well as store and business owners. District administration officials said that ₹18,000 has already been collected as fines for littering.

Random raids and surprise checks don’t seem to have deterred sellers of plastic products. Even consumers have stopped saying no to plastics.

Sumathi, a housewife who resides in Kodambakkam, said that people should understand the long-term consequences of the use of plastics on a large scale. “It will have a huge environmental impact a few years down the line,” she said.

D. Karthikeyan, Commissioner of Municipal Administration (CMA), said that the ban on plastics needs continuous monitoring. CMA is responsible for ensuring that the ban is implemented in areas under municipalities and corporations in Tamil Nadu. He said that CMA too has been hearing about plastics being back in circulation. “The pro-plastics lobby is quite strong. But we are very strict. Now we are also armed with provisions for penalties. We are levying penalties very stringently,” he added.

He further said that all the agencies responsible for implementing the ban were monitoring the progress of the ban on a weekly basis and also looking at the quantum of penalties being levied. “Definitely, we will tighten controls further,” he added.

Statistics from the Commissioner of Municipal Administration show that a total of 414.24 tonnes of plastic have been seized and fines adding up to ₹89.30 lakh have been collected so far across Tamil Nadu.

J.M.Boopathi, from Salem Consumer Voice Foundation, said that one of the solutions would be to increase the rates of fines. “The awareness has come in amongst mid-level businesses. Plastic usage is mostly found amongst street vendors and other petty shops,” he said.

Consumers said that they had started embracing plastics only because the cost of alternatives had shot up. “Shops are charging ₹5-₹15 for a paper bag. Cloth bags are also priced high,” K. Priya, a college student said. “Why should we pay more for the ban?” she asked.

Swati Singh Sambyal, a researcher on waste management at the Centre for Science and Environment, said that if alternatives were not available at a low cost soon enough, people would automatically go back to plastics. “The State has to ensure that plastics don’t return. That’s what happened in Delhi. You have to look at what is the viability and availability of other materials including cloth or jute bags,” she said.

A few experts said that even consumers carrying banned plastics should be fined. Only then will people get serious about using products that are biodegradable.

A three-judge Bench of the Supreme Court led by Justice R. Banumathi allowed regular bail to former Union Finance Minister P. Chidambaram in the CBI case registered under the INX Media case. The Bench set aside the September 30 order of the Delhi High Court refusing bail to the senior Congress leader. The court said […]

The Left Democratic Front (LDF) government will be on the defensive, mainly on account of the severe drubbing it got in the Lok Sabha elections, when the Assembly begins its monsoon session from Monday. This is the first time that an Assembly session is being held within days after the announcement of results of Parliament […]