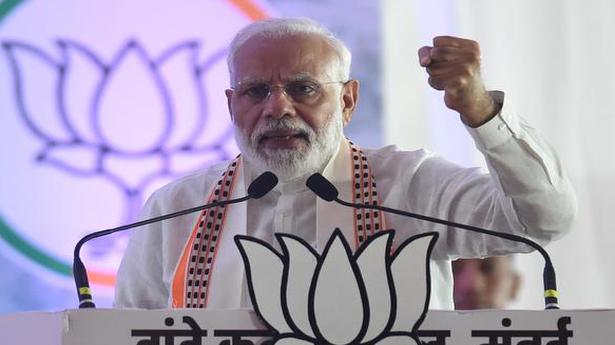 The Congress and other parties related to its culture never gave due respect to the faith, tradition and culture of Indians, Prime Minister Narendra Modi alleged on Saturday.

Mr. Modi, who was addressing an election rally at Ellenabad in Haryana’s Sirsa, said the Kartarpur corridor was about to be completed soon. “It took seven decades to realise this dream. The Kartarpur corridor is near its completion…70 years after the freedom, this opportunity has come… What could be more unfortunate that for nearly 70 years since Independence, devotees had to use binoculars for ‘darshan’ of Gurdwara Kartapur Sahib across the border,” he said

“… those who were responsible for the Partition in 1947, didn’t they realise that just for a distance of four km, devotees had been kept away from the ‘Guru’?… After this, in 70 years, shouldn’t the Congress government made efforts to eliminate this distance? But the Congress and other parties related to its culture had never given due respect to the faith, tradition and culture of Indians,” he stated.

Mr. Modi also accused the Congress of never making any sincere attempts to solve the problems concerning Jammu and Kashmir. “Innocents people were killed… Several of our soldiers laid their lives… 70 years passed by but Babasaheb’s Constitution was not implemented there… Today, when the BJP government has taken a constructive step, Congress leaders and their associated parties are speaking against it,” he said.

“Jammu-Kashmir is not far from us.. Sleeping governments in Delhi worsened the the situation in Kashmir. In initial days, with the help of Pakistan, a part of us was snatched and Pok (Pakistan occupied Kashmir) was created. Few years later, in a well-planned manner, the ‘Sufi’ culture, which was developed here, was cleverly and forcefully finished to dismantle the roots of Kashmir,” he said.

“The leaders in Delhi did not see the atrocities in Kashmir. They thought that by taking care of one or two families, Kashmir will be looked after… A phase came when more than four lakh Kashmiri Pandits’ families were murdered in Kashmir, daughters were raped, and forced to leave Kashmir.,” Now things have changed; the policies for Kashmir would be made by India and people of Kashmir. “People sitting in enemy countries can’t any more decide on India’s destiny,” he asserted.

Biennale in a soup over fiscal allegations

With just over a week for the ongoing edition of the Kochi Muziris Biennale (KMB) to draw to a close, the cash-strapped Kochi Biennale Foundation (KBF) is in a sticky situation resulting from award of work worth crores of rupees without a contract document and is staring at the prospect of legal action by a […]

‘Ashakiranam,’ an autobiography of noted social worker Sankurathri Chandrasekhar, was released at a function held here on Wednesday. Religious scholar Chaganti Koteswara Rao released the book while writer and literary critic Vadrevu Veeralakshmi Devi reviewed the work. Penned by Dr. Chandrasekhar in English with title ‘A Ray of Hope’ the autobiography was translated into Telugu […]