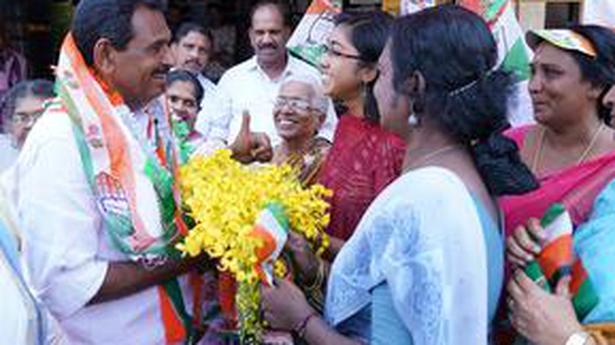 Pathanamthitta is one the few constituencies in the entire State where a fierce three-cornered contest is shaping up. And, the three main contenders in the Lok Sabha constituency — UDF’s Anto Antony, Aranmula MLA and LDF candidate Veena George, and K. Surendran of the BJP — are leaving no stone unturned to draw the attention of the voters. Braving the scorching heat, they criss-cross the length and breadth of the predomenently agrarian belt meeting the voters.

It was 12 noon. The motorcade of Mr. Antony reached Ezhumattoor in the hilly tracts of Mallappally to a rousing reception by UDF workers. Alighting from the open jeep, the candidate exchanged pleasantries with party workers and villagers assembled there, before getting down to the business of seeking votes. The motorcade moved past Ezhumattoor Junction in the next five minutes.

‘‘We will vote for the Congress as the Centre has made life miserable even for small and medium rubber growers like us,’’ said Thomas Kuruvila.

The UDF has also taken up the amicus curiae report attributing the devastating deluge of August last to poor dam management by the State agencies as a main poll plank, especially in the worst-affected areas of Ranni, Ayroor, Kozhencherry, Aranmula and Thiruvalla. An electrifying reception awaited Mr. Antony at Ezhikkad that houses the State’s second largest Scheduled Caste settlement. The mood was suggestive of a notable change in the political mindset of the otherwise pro-Left colony residents following the visit of Congress president Rahul Gandhi in the post-flood days.

Being the early bird on the campaign front, a well-oiled campaign machinery, and a strong support base are the strengths of the LDF candidate.

By fielding an agile woman legislator such as Ms. George, the CPI(M) and LDF appear to be all out to capture the hitherto UDF bastion. Moreover, Chief Minister Pinarayi Vijayan has taken the party’s contest in Pathanamthitta a prestigious one against the backdrop of the government’s stand in implementing the Supreme Court order permitting entry for women of all age groups to Sabarimala.

Ms. George is a familiar face in her own Assembly segment and the crowd elsewhere in the constituency to greet her is a testimony to her growing popularity.

The Sabarimala issue and the `poster boy’ image of Mr. Surendran created during the stir that followed is undoubtedly the poll plank of the BJP.

The invigorating parady of popular Ayyappa songs are the main accompaniments of the motorcade of the NDA candidate throughout his campaign tour.

The influence of the Sabarimala issue is evident in the growing presence of women at the corner meetings of Mr. Surendran. The candidature of Mr. Surendran appears to have instilled a new hope in the party rank and file in the constituency that houses Sabarimala.

The hotspot was the source to the over dozen cases detected in Chittor, Kurnool, Nellore, and Guntur districts a few days ago Source: thehindu.com Related

The Manuguru Area Committee of the CPI (Maoist) suffered a setback with a cadre of its armed squad being killed in an alleged encounter with the police in Budugula forest area of Manuguru mandal in the erstwhile naxal stronghold of Pinapaka constituency in the early hours of Wednesday. Police sources identified the slain cadre as […]

The anti-Citizenship (Amendment) Bill protests have brought demands of the Adivasis or tea tribes in Assam to the forefront. Chief Minister Sarbananda Sonowal met the leaders of two influential Adivasi students’ unions — the All Adivasi Students’ Association of Assam and the All Santhal Students’ Union — on Tuesday evening to assure them that the […]