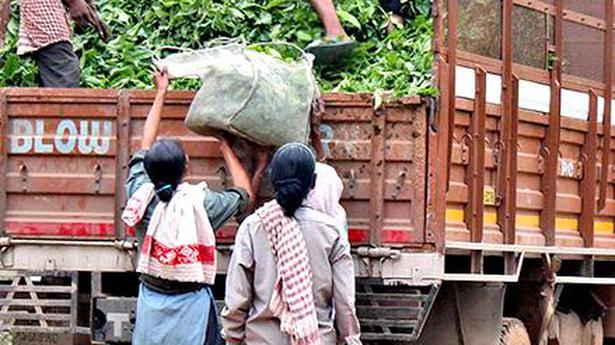 Dev Kanta Barooah, the Congress president during the Emergency, had no qualms about saying that the party depended on Ali-Coolie-Bangali for votes.

Ali stood for migrant Muslims, Coolie – a British pejorative – for tea plantation workers and Bangali for migrant Bengali Hindus. Together, they are more than 60% of Assam’s 21,760,604 voters.

The Congress received its first jolt in 1985 when the Asom Gana Parishad, riding on sentiments generated by the Assam agitation, secured votes of the indigenous communities, while the migrant Hindus and Muslims chose the now-defunct United Minorities Front.

Plantation workers, casually referred to as “tea tribes”, brought from central India’s Chhotanagpur Plateau remained loyal to the Congress until most of them shifted allegiance to the Bharatiya Janata Party in 2014. That year, the BJP bagged four of the five Lok Sabha seats – Dibrugarh, Jorhat, Lakhimpur, Tezpur and Kaliabor – where the votes of the tea plantation workers matter.

Tea plantation workers constitute 35-45% of the voters in these five seats where elections would be held in the first phase on April 11.

A majority of the 800 tea estates and 65,000 small tea gardens are in the districts covered by the Dibrugarh and Jorhat parliamentary seats.

“The liquor tragedy a month ago, the failure of the BJP government in granting Scheduled Tribe (ST) status to plantation workers, and non-revision of wages of tea workers will bring them back to the Congress,” Rupesh Gowala, general secretary of the Congress-affiliated Assam Chah Mazdoor Sangha, said.

“The government was quick in taking action against illegal brewers. The Congress is making this an issue because they have nothing else to tell the people in the tea gardens since the people are happy with beneficiary schemes and cash incentives,” Mr. Teli, the BJP candidate, said.

Both Mr. Ghatowar and Mr. Teli belong to the tea community.

The top contenders for the Jorhat seat are State Minister Topon Kumar Gogoi of the BJP and Sushanta Borgohain of the Congress. The latter hopes to cash in on the perceived resentment among tea workers against the BJP for replacing incumbent Kamakhya Prasad Tassa, a tea community leader, with Mr Gogoi.

BJP puts up a brave face amid tribal discomfort

A few days before the Jharkhand Assembly election got under way, the Union government withdrew amendments to the Forest Rights Act (FRA), which had evoked sustained protests by tribal and environmental activists. It was an acknowledgement by the ruling party that tribal sentiments were hurt by the amendments that would dilute tribal rights over forests. […]

Asserting that universities should play a leading role in addressing specific challenges faced by the nation, President Ram Nath Kovind on Tuesday said higher educational institutes should emerge as spaces that nurture free expression and ideas. His remarks come in the backdrop of violent protests witnessed recently at Aligarh Muslim University and Jamia Millia Islamia […]