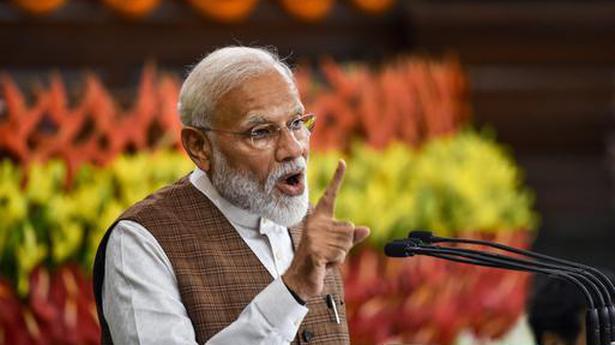 As preparations are on for the swearing-in of a new government led by Narendra Modi, various BJP and National Democratic Alliance constituents have begun receiving calls to join the Cabinet.

The Minister-designates will meet Mr. Modi at 7, Lok Kalyan Marg, at 4.30 p.m. in New Delhi on May 30, BJP sources said. The swearing-in ceremony is set to begin at 7 p.m.

The Shiv Sena on Thursday said its Mumbai South MP Arvind Sawant will be part of the Union Council of Ministers.

Many of those who have received calls are those who have been Ministers in the previous administration. There are also some new inductees. Sources say allies are slated to get one seat each — one each for the Shiv Sena, the Lok Jan Shakti Party, the Janata Dal (United), the Shiromani Akali Dal, the Asom Gana Parishad, the Apna Dal, the Rashtriya Lok Samata Party and the Republican Party of India (A).

Mr. Modi and BJP president Amit Shah held marathon meetings on Tuesday evening and Wednesday afternoon to finalise the list of Ministers. It remains unclear if Mr. Shah would be made a Minister since the BJP follows “one man one post” rule. The sources said Mr. Shah was keen on retaining the top party post, with several State elections ahead, including Maharashtra, Jharkhand and Haryana, but his presence in the Cabinet was also being considered.

The Uttar Pradesh government on Thursday removed Amethi District Magistrate Prashant Sharma, a day after a video clip of him meeting the bereaved family of Vijay Kumar Singh alias Sonu Singh went viral on social media. On the demands of the family, Mr. Sharma had visited the post-mortem house on Wednesday, where the body of […]

Former Minister Botcha Satyanarayana on Sunday alleged that Chief Minister N.Chandrababu Naidu had put Andhra Pradesh in a debt trap and made people’s lives miserable. He said he was voted to power in 2014 elections just because of his previous experience as a Chief Minister. Addressing a media conference here on Sunday, he alleged that […]

A woman Superintendent of Police, who had levelled sexual harassment charges against an Inspector General of Police when she served in the Directorate of Vigilance and Anti Corruption (DVAC) last year, has approached the Madras High Court accusing Chief Minister Edappadi K. Palaniswami and Deputy Chief Minister O. Panneerselvam of attempting to shield the officer […]