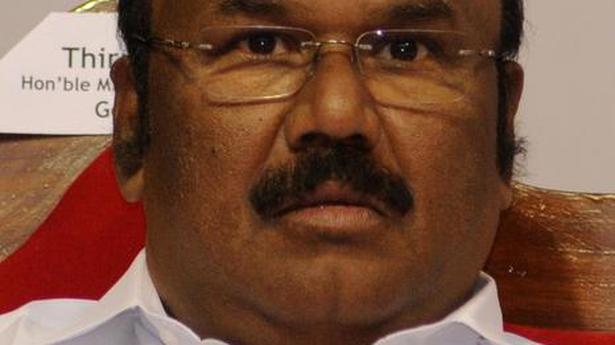 “Whoever wants to become the CM can go to Ecuador and buy an island to declare themselves the CM, just like Nithyananda [a godman wanted by investigating sleuths]. We don’t have any objection,” he quipped in a lighter vein.

At an interaction with journalists in Chennai, he took on Mr. Stalin for hailing as “historic”, the Supreme Court’s verdict on holding civic polls in rural local bodies in 27 districts and later approaching the Supreme Court challenging the poll notification issued by the State Election Commission.

He also claimed that the DMK head office Arivalayam has become an unwanted place, as the party organised its district secretaries meeting in a private hotel recently. The meeting, he said, resolved to welcome local body polls at the same time the party went to the court challenging it.

“It is unfortunate that the DMK has come to this [state of affairs]. And Mr. Stalin is nurturing ambitions to become the CM,” he said.

To another query on RSS ideologue S. Gurumurthy’s reported statement that the culture in the State deteriorated only during the rule of both the Dravidian parties, Mr. Jayakumar said his comments cannot be taken seriously. “He does not know politics. He is only a chartered accountant. He is criticising the AIADMK only to make himself famous. Where is imayamalai [the Himalayas] and where is parangimalai [St. Thomas Mount],” the Minister remarked.

Prime Minister Narendra Modi and West Bengal Chief Minister Mamata Banerjee will hold a meeting at the Raj Bhavan on Saturday evening, a state secretariat official confirmed on Friday. According to the highly-placed official, the meeting between the two leaders will be held here soon after the Prime Minister arrives in the city on Saturday […]

A team of senior police officers on Sunday inspected the ward where jailed RJD chief Lalu Prasad is undergoing treatment at the Rajendra Institute of Medical Sciences (RIMS) here. A purported video that recently went viral on the social media had showed more than three visitors at the paying ward of Prasad, in violation of […]

India needs to retain control of the strategic heights of the Siachen Glacier as they are vital to the country’s defences in Ladakh, Jammu and Kashmir, Army Chief General Manoj Naravane said on Thursday. “It is a strategically important location at the very head of our defences and it is absolutely important to remain ever […]