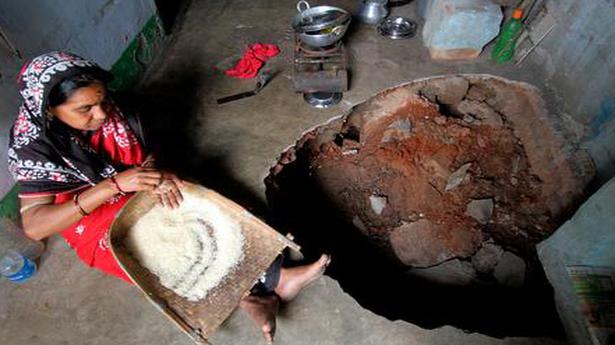 This coal town is sitting on a ticking time bomb. Even a minor earthquake could result in this town with a population of one lakh collapsing like a house of cards.

Several experts and residents have raised the issue of the town now existing over a vast underground void left behind by extensive coal mining. With election season approaching, residents, fed up with official apathy for more than three decades and battling for survival, seem to be in no mood to give political parties any leeway.

“For years, the public sector Mahanadi Coalfield Limited (MCL), a subsidiary of Coal India Limited, has been active in the Talcher coalfields. Millions of tonnes of coal have been quarried through underground mining. As per guideline, mine void should haven stowed with sand. But it has not been done, pushing thousands of people into uncertain future,” said Bibhudendra Prasad Das, president of Brahmani Anchal Surakshya Parishad (BASP).

Director General of Mine Safety in 2007 declared most parts of Talcher township as ‘no construction zone’ due to the mining void. Subsequently, the Talcher-Angul-Meramundali Development Authority stopped approving building construction in Atharpa, Remuan, Koilunda and Talcher township.

“The threat had been identified. Natives living for ages had no role in creating the void. The government coffer has been filled with thousands crores of rupees due to mining. However, authorities washed their hands off leaving people to fend for themselves,” said Mr. Das.

In 32 years, 15 major cases of land subsidence have been reported, the latest as recently as December 2018, when a 4-foot deep-cavity suddenly formed in the home of Shantilata Bai in Talcher.

“A majority of population may slip into the mine void if a moderate earthquake shakes the area or large parts of township may also cave in if water channel of Brahmani, Odisha’s second largest river flowing few hundred metres away, finds its way into the void,” said Ranjit Mohapatra, convenor of a forum of people affected by underground coal mining.

In 2011, Odisha government informed the State Assemnly that only 41.80% of Deulabeda underground mine had been filled up. Although, the State government quoting Geological Survey of India says Talcher falls in earthquake-prone zone, the sand filling has not been expedited.

A couple of days after election dates were announced, Chief Minister Naveen Patnaik shot off a letter to Union Coal Minister Piyush Goyal saying “The MCL has already utilized about 10,000 ha of land acquired under Coal Bearing Areas (Acquisition and Development) Act, 1957 for mining activities. However, in its two underground mines, closed respectively 1998 and 2006, MCL has just completed the stand stowing work of 5.38 lakh cubic metre against the requirement of over 9.15 lakh cubic metre.”

“The non-completion of sand stowing continues to pose the threat of soil subsidence. It is requested that MCL may be advised to complete the balance sand stowing expeditiously,” Mr. Patnaik noted in his letter.

The MCL authorities seem unworried even though alarm bells have already started ringing. At one of the sand-stowing spots inside Talcher town, two to three workers were seen physically channeling sand into void. Workers said only two-tractor loads of sand could be dispatched into the void in a day.

“It may take three to four decades to fill the void, if sand-filling is carried out at this speed,” Mr. Mohapatra said adding that residents are determined to extract written pledge from candidates contesting election this year.

Execution of Nirbhaya convicts will not happen on Jan. 22 as mercy plea filed: Delhi govt to HC

The Delhi government on Wednesday told the High Court that execution of the death row convicts in the Nirbhaya gangrape and murder case will not take place on January 22 as a mercy plea has been filed by one of them. The four convicts — Vinay Sharma (26), Mukesh Kumar (32), Akshay Kumar Singh (31) […]

As campaigning for the seventh and final phase of Lok Sabha elections in 59 parliamentary constituencies ended on Friday, over 10.17 crore voters across seven states and one Union Territory are ready to decide the fate of 918 candidates on Sunday. The States which will go to the polls on Sunday are Punjab (13), Uttar […]