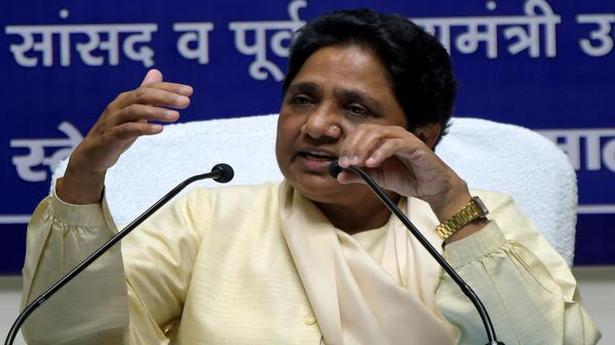 Bahujan Samaj Party chief Mayawati on April 30 accused the Congress dispensation in Madhya Pradesh of misusing the ‘government machinery” and declared that her party would reconsider its support to Chief Minister Kamal Nath’s government in the State.

Through two tweets in Hindi, Ms. Mayawati hit out at the Congress, saying that the party was no less than the BJP when it came to the misuse of government machinery. She said the Congress government had threatened the BSP candidate for the Guna Lok Sabha seat. The candidate, Lokendra Singh Rajput, joined the Congress on April 29.

Ms. Mayawati said the BSP would contest the election on its own symbol and fight to give a reply to this and reconsider the support to the Congress government.

In Uttar Pradesh, she said, Congress leaders were telling the public that the BSP-Samajwadi Party alliance should not win, even if the BJP did. This showed the Congress’s casteist and two-faced nature, she alleged and asked people to be aware. People rightly believed that the alliance was the only one that could defeat the BJP, she added.

Air India mistakenly cancelled the ticket of a Boston-based man with the same name as comedian Kunal Kamra, on its Jaipur-Mumbai flight of February 3, according to senior officials. However, he was reissued the ticket and allowed to board the flight once the airline staff at the Jaipur airport realised that he is not the […]

Case filed against parents of toddler who fell off vehicle

The Kerala police on Tuesday filed a case under Section 308 of the Juvenile Justice Act against the parents of an infant who miraculously survived after she fell from a vehicle near a forest check-post at Ancham Mile, near Rajamala, on Sunday night. Based on media reports, the Kerala State Commission for Protection of Child […]