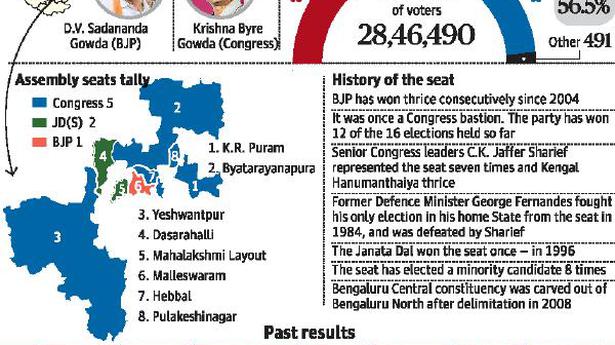 In the Bengaluru North Lok Sabha constituency, a buoyant Congress, backed by its coalition partner — the Janata Dal (Secular), is taking on incumbent Bharatiya Janata Party MP and Union Minister D.V. Sadananda Gowda. The BJP has won the seat three times in a row since 2004, and intends to repeat its success this year too. It is banking on Prime Minister Narendra Modi’s appeal and its non-controversial and amiable candidate.

The Congress, however, remains optimistic as the city gears up to vote on April 18. Its optimism stems from three factors: its coalition with the JD(S), the individual performance of the coalition partners in the Assembly elections last year, and its candidate — the urbane and suave Krishna Byre Gowda, a local MLA and Minister.

The seat — first allotted to the JD(S) as part of a seat-sharing agreement — was returned to the Congress owing to the lack of a suitable candidate. In a constituency said to be dominated by Vokkaligas, Mr. Krishna Byre Gowda emerged as the consensus candidate because of his track record of giving a tough fight to BJP leader late Ananth Kumar in Bengaluru South in the 2009 elections.

“A victory to Mr. Krishna Byre Gowda will create a vacancy in the State Cabinet, on which multiple MLAs from the constituency have an eye on. So it is in their self-interest to get him win,” said a senior Congress leader.

The BJP and Mr. Sadananda Gowda, however, counter that this logic is flawed. “The argument that the strength of the party MLAs in the constituency will impact the Lok Sabha elections is a myth. The people have decided to vote for Mr. Modi,” said Mr. Sadananda Gowda.

Mr. Krishna Byre Gowda in an interview to The Hindu had conceded that the plus point of the BJP was the Modi factor, one that the coalition has to overcome.

In an attempt to probably overcome the Modi factor, the campaign has shifted to attacking Mr. Sadananda Gowda over how “he has not taken interest in local issues and his involvement in the constituency is negligible”, as Mr. Krishna Byre Gowda put it. These charges have put Mr. Sadananda Gowda on the defensive. He claims he is not the kind of person to hog the limelight for the work he has done and is probably a “misfit” in today’s politics. In an attempt to present himself in the Ananth Kumar mould, he is projecting himself as a bridge between the State and the Centre.

Mr. Sadananda Gowda, who hails from Sullia in Dakshina Kannada, is also being branded an “outsider” by his opponents. Mr. Krishna Byre Gowda hails from Kolar district and shifted base to the city in 2008.

The constituency includes regions along Ballari Road, Tumakuru Road, and Mysuru Road that have for long been tipped to be the next growth area. So far, they have failed to meet their potential owing to a gap in infrastructure.

Former BJD lawmaker Baijyant ‘Jay’ Panda joined the BJP on Monday, giving a boost to the party in Odisha where it is looking to improve its tally in the coming Lok Sabha election. The Assembly polls in the State is likely to be held along with the parliamentary election, and the party hopes that the […]

India has deployed its aircraft carrier INS Vikramaditya in the Arabian Sea at a time China and Pakistan are holding a nine-day mega naval exercise in the region, a move seen as New Delhi sending a signal to its two neighbours. Top officials of the Naval headquarters were on board the aircraft carrier when it […]

The Orissa High Court on Monday directed the State Bar Council to ensure that the elections to form the executive bodies of all 167 bars in the State are completed by this month-end on the principle of ‘one bar, one vote’. The High Court also quashed the February 24 resolution passed by the Bar Council […]