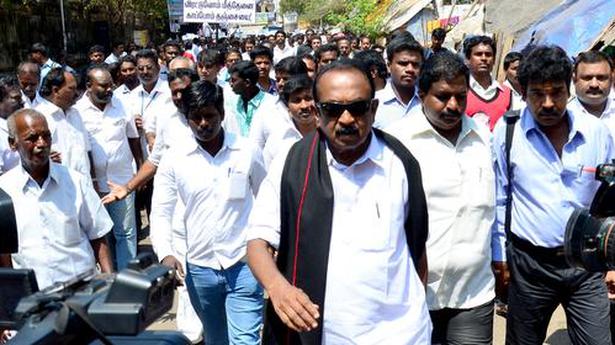 In a statement, Mr. Vaiko referred to the July 2017 notification of the State government to acquire over 57,000 acre of land in 45 villages for the PCPIR.

“If Tamil Nadu government is truly concerned about farmers and plans to declare the Special Protected Agriculture Zone in Cauvery delta, it should also withdraw the notification for the PCPIR,” Mr. Vaiko said.

While protecting the Cauvery delta, the government was attempting to set up petrochemical project along with Haldia petrochemicals in Cuddalore district at ₹50,000 crore, the Rajya Sabha MP noted.

Pointing out how the legislation passed in the Assembly against NEET in Tamil Nadu was ignored by the Centre, Mr. Vaiko said besides passing legislation for Special Protected Agriculture Zone, the government must be focused on implementing it.

In Lok Sabha, Mulayam seeks to know when Farooq will attend House

Samajwadi Party leader Mulayam Singh Yadav on Tuesday sought to know from the government when former Jammu and Kashmir Chief Minister and sitting MP Farooq Abdullah would be released from custody. Mr. Yadav raised the issue of Mr. Abdullah’s detention by the Jammu and Kashmir administration in Lok Sabha during the Question Hour. “Our colleague […]

Guntur shuttlers have a memorable day with expert Martina Krocova

As many as 40 young shuttle badminton players had the opportunity of getting trained under international coach Martina Krocova from Czech Republic, through the initiative of Gujjula Sudhakar Reddy(GSR) Badminton Academy and Guntur Club. The GSR Academy was held in memory of Mr. Sudhakar Reddy, an international shuttler from Guntur, and a coach who has […]

Three rescuers were trapped after a three-storey building collapsed early Wednesday when fire department personnel were trying to put out a blaze in Jammu city, officials said. The building, housing a saw mill on the ground floor, collapsed during firefighting in Golepulli area, they said. Several people, including five firemen, were trapped under the debris, […]