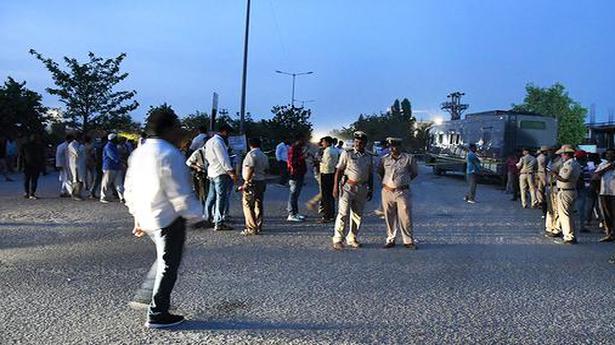 A woman and her five-year-old daughter who were watching a film shoot were killed when a scene involving a car that was set to explode went horribly wrong at Bengaluru Aerospace Park SEZ, Bagalur, on the city’s outskirts on Friday evening.

The accident occurred during the shoot of the Kannada film Ranam, produced by Kanakapura Srinivas and starring Chiranjeevi Sarja and Chetan.

The dead have been identified as Sumera, 29, and Ahera, 5. Sumera’s elder daughter, Shehnaz, 8, was injured and is being treated.

The woman and her daughters were on their way to Sulibele when they noticed the film shooting, for which traffic had allegedly been blocked.

The family got out to watch the shoot. Sumera, Ahera, and Shehnaz stood behind a film mobile van, parked near the spot where the car was set to explode, said eyewitnesses.

Multiple compressor cannons had been placed under an SUV. The cannons when fired were expected to propel the car into the air. However, when they were fired, one of the cannons — a 3.5-ft-long metallic cylinder — flew across the road with high velocity and hit the bystanders, killing Ahera and Sumera on the spot, the eyewitnesses said.

Shehnaz suffered injuries on her face and head, but she is out of danger, the police said, quoting doctors.

Residents of a nearby village claimed that members of the film unit, instead of attending to the victims, fled from the scene abandoning everything in a matter of minutes. It was villagers from Mahadeva Kodigehalli who helped shift the injured Shehnaz to hospital.

Kala Krishnaswamy, DCP (North-East) said the film unit had not taken permission for shooting. The police have booked a case of culpable homicide not amounting to murder against the unit members.

The Supreme Court on Monday decided to consider the question whether the challenge to the 10% economic reservation law should be heard by a Constitution Bench. A three-judge Bench led by Chief Justice of India Ranjan Gogoi scheduled the hearing on the question of reference to the larger Bench for March 28. Meanwhile, the court […]

Members of Opposition parties in the Tamil Nadu Legislative Assembly led by DMK president and Leader of the Opposition M.K. Stalin walked out of the House on the first day of the session, boycotting the Governor’s address on Monday. Soon after Governor Banwarilal Purohit commenced his speech after the customary rendition of Tamil Thai Vazhthu, […]

The Kerala police on Wednesday began a preliminary enquiry into the allegation that the convenor of the Left Democratic Front, A. Vijayaraghavan, had publicly disparaged Remya Haridas, the United Democratic Front (UDF) candidate from Alathur Lok Sabha constituency, in a fashion that outraged her modesty as a woman. DySP-Alathur, Biju Bhaskar, the investigating officer (IO), […]