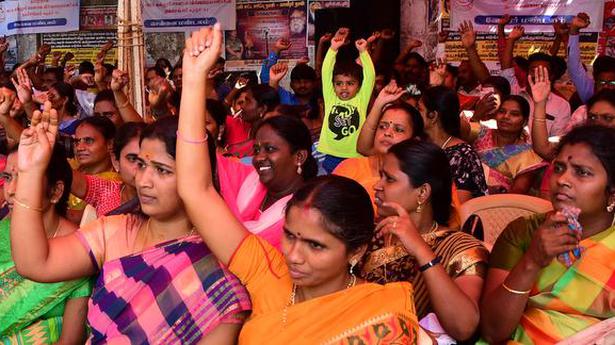 Women guest lecturers working in government arts and science colleges have complained about denial of maternity leave despite being in service for many years.

More than 3,500 guest lecturers, of which a large number are women, are engaged by the Higher Education Department to teach in these colleges. Tamil Nadu government at present provides 270 days of maternity leave to its women employees, subjected to them meeting certain eligibility criteria.

Citing a letter issued by the Principal Secretary to Government (Training) on April 20, 2015, the women guest lecturers say that, as per the letter, they will fall under the category of “non-permanent married women government servants, employed under the emergency provisions i.e. temporarily” and hence will be eligible for maternity leave provided they have completed one year of employment.

L. Uma Bharathi, a guest lecturer in Quaid-e-Millath Government College for Women, who is expecting her second child, said that officials, however, denied her leave by stating that guest lecturers were not eligible.

“Though majority of us are engaged for many years in colleges, we do not receive salary for the month of May during vacation. Every June, the government shows as if we are engaged afresh. Hence, we are being told that we cannot claim to have completed more than one year,” she said. “The delivery of my first child was through C-Section. Hence, this child is also going to be C-Section. My doctor has advised me to be on leave,” she noted.

V. Thangaraj, State president, Tamil Nadu All Government College UGC Qualified Guest Lecturers’ Association, said that the guest lecturers have been demanding maternity leave for many years. “We are not even stressing for paid leave. Anyway, we are getting a pittance of only ₹15,000 since 2016. The government should at least consider providing unpaid maternity leave with an assurance that the women can join back work after their leave,” he said.

Slamming the Centre over the enactment of the Citizenship (Amendment) Act, Rajasthan Deputy Chief Minister Sachin Pilot on Thursday said the State government would introduce a resolution against the implementation of the CAA in the Assembly session beginning on Friday. The ruling Congress has issued a whip asking its MLAs to attend the session on […]

Chief Minister N. Chandrababu Naidu on Saturday said there was a huge wave in favour of the TDP across the State, thanks to the good governance and welfare schemes of his government. Developmental activities would continue without any break only if the TDP was voted to power again, Mr. Naidu said while addressing public meetings […]