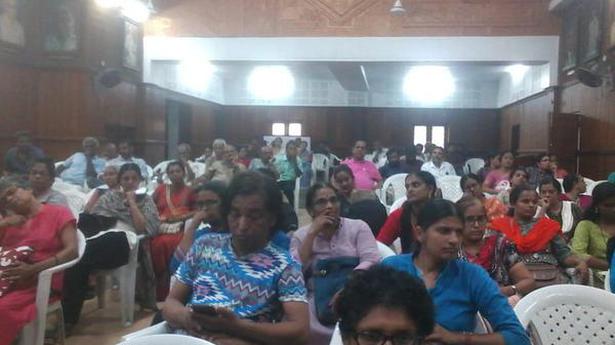 Kerala had never seen such a massive women’s turnout as in the recent past in the fight for their rights. The Left Democratic Front (LDF) government, which initiated the ‘women’s wall’ against gender discrimination, gave huge hopes for women. There were serious discussions on women’s empowerment. Irrespective of political affiliations, all parties vouched for women’s rights.

A few months later, when the candidates’ lists of political parties for the Lok Sabha elections were out, once again it was proved — gender parity in Parliament will remain an illusion.

Realising the need for a united and consistent struggle to achieve the goal, various organisations in the State that work for equal representation of women in Parliament have formed an umbrella movement called Thulya Prathinidhya Prasthanam (Movement for equal representation). They conducted their first State-level meeting in Thrissur on Wednesday.

In Kerala, all the three fronts — the LDF, United Democratic Front (UDF), and the National Democratic Alliance (NDA) — were one voice in limiting the number of women candidates to two, alleged the organisers of the movement.

“Irrespective of party affiliations, all claim that they will implement the Women’s Reservation Bill in Parliament if they are elected. They repeat it every time. They are acting so irresponsibly. This is because women do not have a collective voice. We cannot wait any more,” said K.M. Rema, convener of the Thulya Prathinidhya Prasthanam.

India is in the 149th position on the list of 193 countries on the basis of the number of elected women members in Parliament, even under Pakistan, Bangladesh, and Afghanistan.

The country has an electoral system that provides representation to Lok Sabha on the basis of population. Thus, Uttar Pradesh, which has a population of over 200 million people, has 80 MPs, and Kerala has only 20 MPs.

Even when women constitute half the voters in the country, their participation in Parliament is a mere 12%. In Kerala, where 52% voters are women, we sent only one woman to Parliament last time. Of the 140 seats in Kerala Assembly, there are only eight women MLAs.

Reservation for one-third of the seats for women in the Lok Sabha has been tabled as a Bill for several times. It has lapsed every single time.

“When the issue of gender parity was raised, some parties here said: it is the fight against fascism in this election and we should stand together irrespective of gender. But the Trinamool Congress which gave 41% seats to women and Biju Janatha Dal which gave 33% too face the same situation. But they fulfilled their responsibility. Other political party leaders should follow the model,” noted Ms. Rema.

Only a Parliament with equal representation will be able to craft priorities and formulate policies in a democratic way. “Documents reveal that greater representation of women in local body institutions had ensured a balance in priorities,” she pointed out.

The Thulya Prathinidhya Prasthanam wants to work as a pressure group in society.

“There has been widespread protests against the discrimination faced by women in politics. Our objective is to consolidate these protests. Already there are many groups working with this objective. We know this is a long fight,” said Mini Balachandran, a member of the organisation.

“We expect women from mainstream political parties too to join this movement. Many of them face grave discrimination. They are not able to voice their protest as they do not have much strength in the party. Women have to create more space within parties to voice their thoughts and influence the decision-making process,” said Ms. Balachandran.

A number of city-based NGOs under the umbrella of Nagrik Kriti Samiti (NKS) have demanded that the Pune Municipal Corporation (PMC) scrap the tender floated earlier this year for the controversial 36-km High Capacity Mass Transit Route (HCMTR) project. The NKS has alleged that the bids for the project were grossly inflated and that the […]

As many as 15 persons, who returned from Maharashtra on May 12, tested positive on Monday. Health Department officers collected samples from them at t Source: thehindu.com Related

Story of father of Indian space programme in photos

The story of the Indian space programme is closely entwined with the story of Vikram Ambalal Sarabhai. A slim commemorative volume published by the Indian Space Research Organisation (ISRO) offers, through a clutch of black-and-white photographs, valuable glimpses into the life and times of the remarkable man and the evolution of the ISRO. Dr. Vikram […]