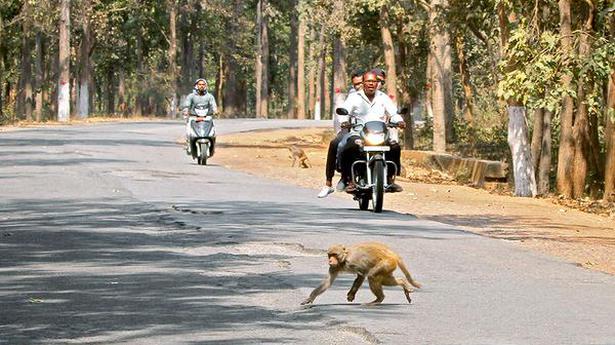 Odisha Forest department is planting guava and custard apple trees in many areas to lure the monkeys back to the forest.

Monkeys have been moving out of their forest habitats in search of food and causing trouble to the villagers as well as wildlife conservationists across the State. At the same time, the simians also face threat to their lives as they are out of their natural habitats.

Hundreds of monkeys live near the 5-km stretch between Biswanathpur and Kadalighat in Bhawanipatna-Lanjigarh Road in the Kalahandi district.

If the passers-by stop or slow down their vehicles on this stretch, monkeys rush from all sides in anticipation of food. Sometimes, the little ones even get crushed under the wheels of speeding trucks or buses.

“We have taken many steps. All along the stretch, we have put up sign boards urging people not to give food to the monkeys. Our squads regularly patrol the area to prevent people from teasing or disturbing monkeys,” said Kalahandi Division (South) Divisional Forest Officer T. Ashok Kumar.

“You cannot relocate monkeys deep inside forest here. Had it been seven to eight monkeys, we could have thought of tranquillising and trans-locating them to other places. But there are thousands of monkeys sitting on the road waiting to receive food from people,” he added.

“Once food-sharing is stopped, monkeys will feel compelled to go inside the forest. At the same time, we are also trying to enrich their habitats with food of their choice,” said Mr. Kumar.

Four years ago, the forest personnel had planted fruit-bearing trees in 40 hectares of land under Biswanathpur forest range. “We are expecting fruits in those trees in a year. If the experiment succeeds, the drive will be scaled up,” said Forest Ranger of Biswanathpur.

However, it is not only in the Kalahandi district where monkeys have abandoned forest habitats, the menace is prevalent at major religious places and coastal region also.

Large and Medium Industries Minister Jagadish Shettar lashed out at Congress leader D.K. Shivakumar for allegedly being sympathetic to those shouting pro-Pakistan slogans. Speaking to presspersons here on Saturday, Mr. Shettar said that pro-Pakistan slogans have now come from a girl, and it will not be surprising if such a slogan comes from Mr. Shivakumar […]

The Supreme Court on Tuesday refused the Union government”s request for a whole month to respond to the Rafale case review petitions and instead gave it five days till Saturday. A Bench led by Chief Justice of India (CJI) Ranjan Gogoi ordered the government to file its reply in an affidavit “on or before Saturday”. […]

Ex-armyman hacked to death by teenage son in Mettupalayam