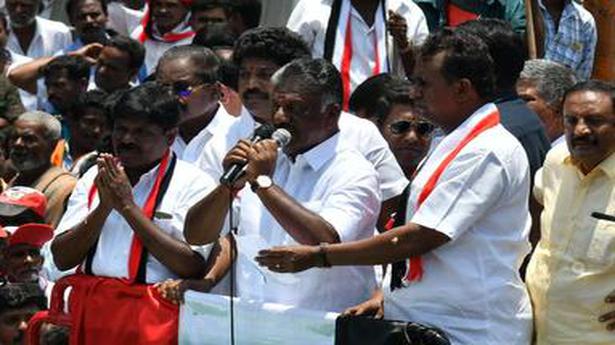 Deputy Chief Minister O Panneerselvam on Thursday appealed to the residents of the Nilgiris to acknowledge the work done by the AIADMK government across the State, and vote for their candidate in the elections.

Speaking at an election campaign in Gudalur, Mr. Panneerselvam said that the people of Tamil Nadu had the opportunity to have been ruled by both the DMK and the AIADMK.

“The development works undertaken during the AIADMK rule will definitely convince you to vote for the party,” said Mr. Panneerselvam, who added that the schemes to ensure food security, housing for the poor, education, and the empowerment of women were enacted during the last five years.

He also said that the state had seen tremendous industrial growth during the same period, with an estimated 10 lakh jobs being created.

Taking aim at the DMK party president M K Stalin, Mr. Panneerselvam said that though Mr. Stalin pretends to be a man of the people, drinking tea at roadside tea stalls, the people would see through his act.

“Unlike in the DMK, even a normal party worker in the AIADMK, through dedication and hard work, can become a Minister or even a Chief Minister,” he added.

Talking about the Eelam War in Sri Lanka, Mr. Panneerselvam said that both the DMK and the Congress, which were in power at that time, failed to stop the killing of more than four lakh people by the Sri Lankan government. Mr. Panneerselvam said that problems surrounding lands classified under Section 17 of the Gudalur Janmam Estates (Abolition and Conversion of Ryotwari) Act would be solved, and that over 5,000 homes in the area, which are without power, will be electrified.

Normal life along the 222 km-long NH 37 linking Imphal to the rest of the country and the Jiribam district bordering Assam was severely affected on Saturday as a result of a 24-hour lockdown called by the women vendors of the Jiri market from Friday midnight. Jamini Leima, a leader of the Jiri Market Chaokhat […]

State vows to fight for Ambedkar museum in London

The State government on Friday said it would take all possible steps to stop the closing down of London memorial of Dr. B.R. Ambedkar through an appeal that has already been lodged against the local council’s decision to reject application to convert a residential property in to an official museum. This move comes after the […]