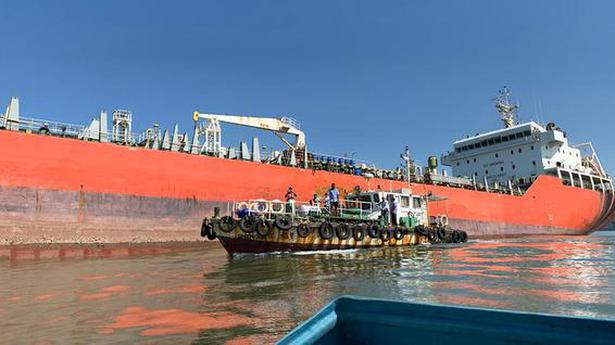 A major operation to pump out 2,400 metric tonnes of naphtha and other fuel from shipping vessel MV Nu-Shi Nalini, grounded off Goa, suffered a setback on Wednesday when a generator brought for the purpose had to be dumped into the sea due to bad weather.

The generator had been flown in from Mumbai by the Navy and was to be placed on board the ship to power the hydraulic pumps that would remove the naphtha along with 50 tonnes of heavy oil and 19 tonnes of diesel. The 144-meter long chemical tanker ran aground approximately 800 metres away from Dona Paula, a popular tourist spot near State capital Panaji on October 24.

“While making its final approach over the ship, the aircraft experienced increasing vertical oscillations. The aircrew attempted to control the aircraft, but keeping in mind the safety of the aircraft, the likelihood of damage to the ship’s deck and the risk of fire due to the highly inflammable naphtha on board considered it prudent to jettison the load into the water…” Commander Karnik said.

Naval divers were deployed to assist in the recovery of the generator.

The multi-agency operation has been under way since October 24, when rough seas, caused by Cyclone Kyarr, led to the grounding of MV Nu-Shi Nalini on a rocky shelf. It is anchored unmanned at Mormugao Port Trust’s outer anchorage and has not moved position since.

According to officials involved in the joint operation, no oil spill has been reported in the vicinity of the vessel yet. The Coast Guard has stationed an oil spill response vessel on site in case of an emergency.

Since an alert about rough seas had been sounded when the incident occurred, the Goa government has filed an FIR and the police is investigating possible criminal negligence.

Chief Minister Pramod Sawant confirmed that the accident would delay the process of emptying the tanks of the stranded tanker by a couple of days. “We are monitoring and working round-the-clock to fix the issue. Tug boats have been stationed and floating barriers have been installed,” Dr. Sawant said.

News analysis: Will ‘Howdy, Modi!’ rub off on Trump?

In early 2017, Prime Minister Narendra Modi’s team was planning his visit to Washington and first meeting with U.S. President Donald Trump. On previous U.S. visits, Mr. Modi had addressed massive diaspora events in New York and San Jose, sending out a powerful message about the power of the Indian-American community and of the Indian […]

Fowl is Fair | The Innovators

Srinivas Chindam and wife Archana love to see poultry growers count their chicks when they hatch. PoultryMon, their patented information device, allows poultry farms to monitor hatchery operations at every stage, helping with real-time data on temperature, humidity and other critical parameters. “We forayed into IoT (Internet of Things) in the manufacturing industry on the […]

The State government has made yet another set of changes to the norms for beneficiaries of various welfare pensions. The major change in norms is regarding the floor area of the beneficiary’s house. As per a government order issued in July last year, to ensure that only those deserving of social security pensions draw it, […]