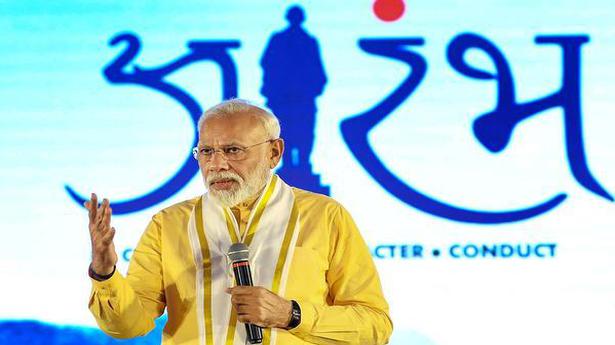 Prime Minister Narendra Modi on Thursday called upon young IAS officers to work together for the nation, saying silos and hierarchy don’t help the system.

He called for working towards realising the vision of making India a $5 trillion economy by 2024-25.

Mr. Modi was addressing bureaucrats participating in the first-ever Common Foundation Course called ‘Aarambh’, being held at Kevadiya in Narmada district of Gujarat.

“This course, Aarambh, is nation-centric and future-centric. It will usher a paradigm shift in administration, whereby people stop working on silos.

“Instead, people work together and in a comprehensive manner,” a tweet posted on Mr. Modi’s official twitter handle – PMO India – quoted him as saying at the event.

Mr. Modi said no bureaucratic posting should be seen as a punishment rather be treated as an opportunity.

“The presence of silos and hierarchy doesn’t help our system. Whoever we are, wherever we are, we have to work together for the nation,” he added.

“Let’s change how we look at things. Even something like a changed terminology helps. Earlier, people would keep saying backward districts. Today we say aspirational districts. Why should any posting be a punishment posting? Why not see it as an opportunity posting?” the PM said.

On the occasion, Mr. Modi remembered the contribution of independent India’s first home minister, Sardrar Vallabhbhai Patel, in the development of civil services.

“The Indian Civil Service (now called Indian Administrative Service) owes a lot to Sardar Patel. From here in Kevadia, where the ‘Statue of Unity’ is, may we all find inspiration and vigour to do something for our nation.

He was here to pay tribute to Sardar Patel on his 144th birth anniversary.

Four persons working in a fruit godown who were trapped inside, were rescued by the Tamil Nadu Fire and Rescue Services early morning on Tuesday. The warehouse is located near Paruthipattu, Avadi. An official of the Fire and rescue Services said the four workers had been trapped inside the godown after huge racks stacked with […]

Terming as “disturbing” reports of police allegedly entering hospitals in violence-hit areas during agitations against the Citizenship (Amendment) Act, the Indian Medical Association (IMA) said such actions are “unacceptable” and demanded that hospitals be declared “safe zones”. The doctors’ body said hospitals are sacrosanct and are exempted from violence even in a war zone. “What […]

Rahul Gandhi: PM is missing the link between national security and livelihood security

You’ve travelled non-stop, criss-crossing the country. What is your sense of the election? What is the mood on the ground? This election centres on the issues of unemployment, the unrelenting plight of our farmers and agrarian distress, and the state of our economy. These issues will define the election. These are the issues that people […]