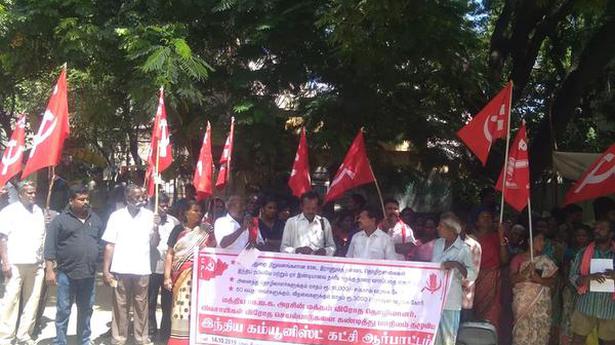 Workers from various factories and companies affiliated to the Communist Party of India staged a demonstration in Ambur on Monday.

Protesting against the anti-farmers’, anti-workers’ policies of the BJP-led government at the Centre, the town secretary of the party, D. Bharath Prabhu said that the money drawn from Reserve Bank of India should be spent on general investments and plans to uplift the rural poor. There has been rising incidence of youth losing their jobs and those who lost jobs should be ensured employment once again, he said.

Madhanur block secretary V. Kumar said that the government is opening up BSNL, Railways to the private sector without any guarantee for the existing employees.

This move should be stopped forthwith and efforts should be made to revive these sectors as they faced extreme pressure due to entry of private players. They should be loaded with additional force to compete with bigger corporates, he said.

All workers should be ensured a minimum wage of ₹18000 per month, he added.

With the Election Commission announcing the enforcement of the model code of conduct from November 11 (Monday), in 15 Karnataka Legislative Assembly constituencies where by-elections are scheduled for December 5, all eyes are now on the Supreme Court which is expected to pronounce its verdict on petitions of 17 disqualified MLAs of the Congress and […]

A 48-year-old man died of coronavirus in Ahmedabad, taking the death toll due to the disease in Gujarat to 17, an official said on Thursday. The man was also suffering from co-morbid conditions, including high blood pressure, principal secretary, (health) Jayanti Ravi said. He died in the morning at SVP Hospital in Ahmedabad. The total […]