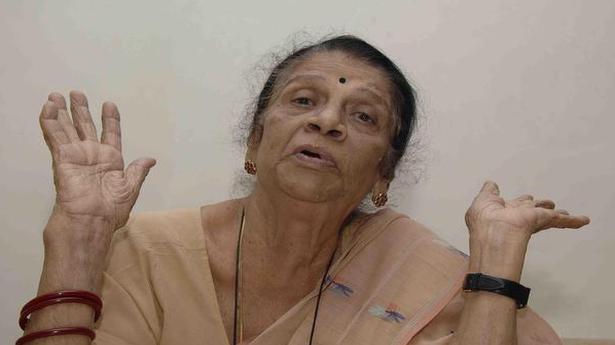 Padma Shri Jaya Arunachalam, founder of Working Women’s Forum (WWF), and a pioneer of the women’s self help group movement in the country, died on Saturday. She was 87.

Through WWF, she helped several lakhs of women from underprivileged background to organise themselves towards becoming financially independent. Nandini Azad, her daughter, who is the president of Indian Co-operative Network for Women (ICNW) and member of the board of International Raiffeisen Union (IRU) in Germany, said that Ms. Jaya Arunachalam was unwell for the past two weeks. “However, she put up a relentless fight against her illness,” she said.

Highlighting the beginning of WWF in 1978, she said that at a time when poor women were financially excluded, Dr. Jaya Arunachalam helped more than 600,000 women to organise themselves and transform their lives from extreme poverty into becoming powerful and confident leaders of their households and community. “She taught us how it could be done. She achieved what the government could not do at that time,” Ms. Azad added.

Dr. Jaya Arunachalam was conferred the Padma Shri by the Government of India in 1987. She received the Jamnalal Bajaj Award in 2009 for her work towards the welfare of women and children. A graduate in Economics and Geography, she was awarded a honorary doctorate by the University of Lueneberg, Germany in 1999.

She is a recipient of the International Activist Award by Glietsman Foundation in 2003, and the Godfrey Phillips National Bravery Social Lifetime Achievement Award in 2010.

Former U.S. Secretary of State Hillary Clinton visited WWF during her visit to India in July 2011. Ms. Jaya Arunachalam also took part in the Clinton Global Initiative Asia Meet in 2008 to discuss the work of WWF and ICNW.

K.S. Alagiri, president, Tamil Nadu Congress Committee, condoled her death. In a statement, he recollected her contribution towards women’s development and said that the micro-credit scheme implemented by her through WWF helped large number of women.

‘Stun grenades were used to disperse students in AMU’

A fact-finding team led by social activist Harsh Mander visited Aligarh Muslim University on Tuesday to look into police excesses on Sunday night during the clash between students and police. “The university Registrar, who is an IPS officer, has admitted that apart from tear-gas shells, stun grenades were used by the police to disperse the […]

A trade union of the Telangana Road Transport Corporation (TSRTC) has appealed to the Centre to offset losses accrued by State Transport Undertakings Source: thehindu.com Related

The chairman of Steel Authority of India Limited (SAIL), Anil Kumar Chaudhary, was assaulted in the Hauz Khas area in an alleged case of road rage, the police said on Thursday. Two accused were arrested from the spot while two others managed to flee, said the police, adding that a manhunt has been launched for […]