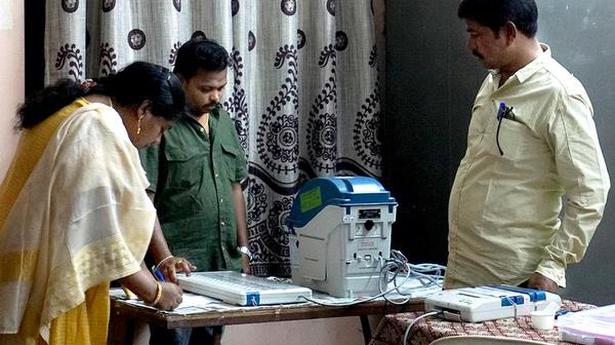 Polling in many booths across the district and the State was stalled for over 30 minutes, five hours at some places, due to malfunctioning of the Electronic Voting Machine (EVM).

While people have attributed it to faulty EVMs, senior professors in electronics and computer science in Andhra University are of the view that something may have gone wrong in handling them.

“The machines are tried and tested, and their chances of failure are remote. The staff handling them are probably not trained well. So they could not handle even minor glitches such as plug-in issues and cable faults,” says P.V.G.D. Prasad Reddy, former Head of the Department of Computer Science Engineering.

Had the problem been major, such as malfunctioning of the software or hardware, intervention of the technical staff was a must. “But in many places, the EVMs have been restored by the staff present there,” Prof. Prasad Reddy said.

Airing a similar opinion, Sasibhushan Rao, Head of the Department of Electronic and Communication Engineering, said, “Everything is embedded in the machine. The chances of IC failing is just one out of 1,000 machines.”

“This apart, improper handling of the EVMs during transit may cause loose connection,” Prof. Sasibhushan added.

Pressing of the wrong button could be another reason, said Venkat Rao, Head of the Department of Computer Science Engineering.

“As per rule, the machines should be tested before despatch. On the polling day, the officials at the booth should come early and run a mock poll. This appears to have been overlooked at some booths. Later, when there is a minor glitch, the officials may have pressed the wrong key, resulting in the system getting stuck,” said Prof. Venkat Rao.

Sports is as important as education: Adimulapu Suresh

The SRR college in the city was buzzing with activity on Tuesday as the players gathered to display their stellar performances at the South Zone Inter-University Men’s Volleyball Tournament, organised by Krishna University, Machilipatnam. The sound of the volleyball being launched in the air at the command of the referee and the boisterous anthems of […]

Differently abled Pranav M.B. will cast his maiden vote with the second toe of his right foot on April 23. And he is excited about it. The excitement was palpable when he showed how to cast vote on an electronic voting machine in the presence of a bevy of VIPs at the Collectorate here on […]