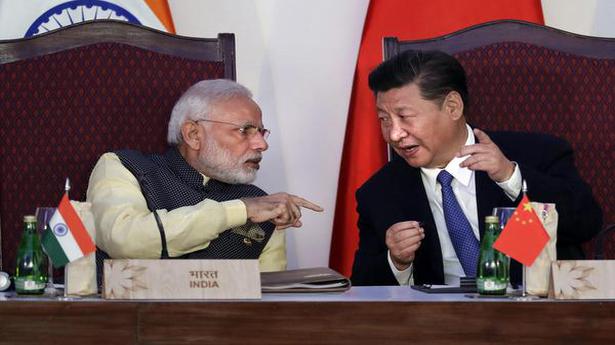 Chinese President Xi Jinping will arrive in Chennai for the second “informal summit” with Prime Minister Narendra Modi on October 11-12, both New Delhi and Beijing announced on Wednesday.

“The forthcoming Chennai Informal Summit will provide an opportunity for the two leaders to continue their discussions on overarching issues of bilateral, regional and global importance and to exchange views on deepening India-China Closer Development Partnership,” the Ministry of External Affairs said in a statement.

No specific outcomes, or agreements are expected at the end of their talks, said government officials, but the two leaders will hold wide-ranging talks on bilateral issues including enhancing trade, resolving the boundary dispute and possible new Confidence Building Measures (CBMs); regional issues including Afghanistan, the Indo-Pacific and terrorism; as well as global issues including trade.

When asked, a government official, who spoke on the condition of anonymity, said India would not wish to discuss China’s recent criticism of the government’s move to amend Article 370, and the decision to bifurcate Jammu and Kashmir, and Ladakh, which includes some area under Chinese control.

“On Article 370, matters relating to the constitution are internal and the idea of discussing this with anyone does not arise,” the official said, adding that the decision to bifurcate the State of Jammu and Kashmir into two Union Territories did not affect the boundary dispute in any way. “If the Chinese President would like to understand the matter further, the PM will outline our stand,” the official added.

Officials said that the visit of President Xi had been planned for several weeks, and dismissed reports that had suggested it would be put off as “needless speculation”. A government official said that the invitation by Beijing to Pakistan Prime Minister Imran Khan right before Mr. Xi’s visit to India was not a cause for concern, nor did it constitute “hyphenating” the relationship.

According to the programme, the two leaders will hold a series of discussions at a hotel in Mamallapuram, about an hour away from Mr. Xi’s hotel in Chennai. On Friday, Mr. Xi will land in Chennai shortly before 2 p.m. He will join the PM for sightseeing in the Mamallapuram temple complex, including the Shore Temple, the Pancha Rathas (five chariots) and Arjuna’s Penance monuments. The two delegations will have dinner along the beach after a cultural performance by Kalakshetra. President Xi will return to Chennai that evening, but return on Saturday morning for another meeting with Mr. Modi followed by lunch, and will then fly out to Kathmandu about 2 p.m.

The choice of Mamallapuram and Chennai had been made due to several reasons, officials aware of the planning said. PM Modi had given “clear guidance” that it would have to be held outside the national capital, and at a historical place, given Mr. Xi’s “interest in history and culture”. Tamil Nadu has a number of historical connections to China, including Tamil prince Bodhidharma, who is credited with bringing Zen Buddhism to China, the visit of 7th century traveller Hsuan-tsang to Kanchipuram, and trading expeditions from the Pallava kingdom to the southeast coast of China.

The meeting in Mamallapuram will mark the 6th meeting between the two leaders since they met in Wuhan last year for a “reset” in India China ties, and officials said they expect the meetings to yield announcements of several other high-level exchanges including the delayed boundary talks between Special Representatives, as well as annual India-China anti-terrorism “Hand-in-Hand” exercises in December this year. Both leaders will meet again within two weeks at the East Asian and RCEP summit in Thailand, and the 16-nation FTA will be on the table for talks, along with bilateral trade issues.

“We have seen some movement on China granting market access in some areas, but the trade deficit remains a matter of concern,” an official said.

Orthodox faction to keep off meet

Weeks after it had turned down a call from the State government to work out a consensus with the Jacobite faction, the Malankara Orthodox Syrian Church on Wednesday reaffirmed its stance not to attend any meetings to settle the issue without implementing the Supreme Court order. “Notes addressed to the Chief Secretary as well as […]

56 are imported cases, one through contact Source: thehindu.com Related