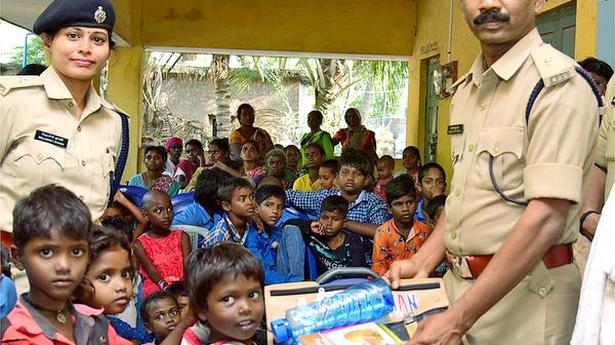 Assistant Superintendent of Police M. Sattibabu on Friday appealed to the Yanadi tribe members to encourage their children to get educated in government schools. He urged them to realise the importance of education to bring about a change in their lives.

At an awareness programme at the local government primary school, Mr. Sattibabu explained to the parents the government support that is available for the education of their children.

The teachers and the parents had also been asked to ensure that every child attended the school regularly and hygienic practices were adopted at the school and at home.

Mr. Sattibabu distributed a set of notebooks and a school bag to the 52 students of the primary school. Bandar DSP Mehaboob Basha and other officials were present.

The ASP and his team of police personnel have been monitoring the colony, particularly the education facilities and other needs of the students.

The II Additional District and Special Sessions Court in Kalaburagi, on Saturday, sentenced Shivakumar, a resident of Kusarampalli village under Chincholi police station limits, to rigorous life imprisonment and fined him ₹50,000 for sexually assaulting a minor girl. As per the Special Public Prosecutor L.V. Chatnalkar, who argued for the State, the accused had lured […]

The judges adjourned the hearing on the PIL petition to June 8 after recording the submission of the AAG that the deadline was likely to be extended till the first week of June. Source: thehindu.com Related

With the Citizenship Amendment Bill (CAB) having been passed by the Lok Sabha, the U.S. International Commission on Religious Freedom (USCIRF) has expressed concern about the Bill and considered recommending sanctions against Home Minister Amit Shah and other top leaders. Watch | All about the Citizenship (Amendment) Bill, 2019 “If the CAB passes in both […]