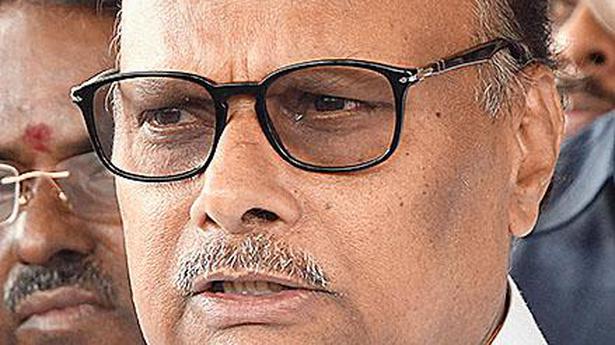 In a statement on Sunday, Mr. Ramakrishnudu said the Chief Secretary had no authority to question the decisions taken by the Cabinet.

The Chief Secretary was “subordinate to the Cabinet, and not vice versa,” Mr. Ramakrishnudu said.

“The Chief Secretary is acting against the Service Rules,” the Minister observed.

Stating that Mr. Subrahmanyam’s comments on loans and interest rates were ridiculous, the Minister said that the Finance Department’s responsibility was to manage the State finances. It would follow the budget approved. The funds would be released as per the priorities such as the welfare of the employees and the poor. The management of funds was a balancing act between revenue and debts, the Minister said.

Referring to the Election Commission of India, the Finance Minister said the election watchdog had miserably failed in discharging its duties enshrined under Article 324. Everybody was equal before the law. Whether it was the Prime Minister or the common man. The Model Code of Conduct (MCC) was not being implemented in letter and spirit. It gave scope for suspicion whether it was the “Modi code of conduct” that was under implementation, the Finance Minister said.

An official was suspended for inspecting the helicopter of Prime Minister Narendra Modi. “On whose instructions was a Muslim official suspended? Was there something in the helicopter? What privilege Mr. Modi has? Why no action was taken against the officials who inspected the helicopters used by the Chief Ministers,” Mr. Ramakrishnudu questioned.

The Finance Minister also sought to know the contents of boxes found in the helicopter used by Mr. Modi. “Why did the ECI not act?” he asked.

Referring to the donations received by the political parties, he said, while the BJP got ₹211 crore, the remaining parties received a mere ₹11 crore. “Does it mean that Mr. Modi is influencing the donors?” he asked.

Former Prime Minister Manmohan Singh will not attend the inauguration ceremony of the Kartarpur corridor in Pakistan but will go there as a common pilgrim, sources close to him said on Sunday. On Saturday, Pakistan Foreign Minister Shah Mahmood Qureshi told reporters in Multan that Dr. Singh had accepted his invitation and would attend the […]

Amarinder warns China against any attempt at intrusion

We do not want war but will not tolerate bullying by Beijing, says Punjab Chief Minister Source: thehindu.com Related

India lashed out at Pakistan for raising the issue of women’s rights in Kashmir in the UN Security Council, saying the country represents a system that has been exporting terrorism and “regressive” extremist ideologies and “stifling” women’s voices for narrow political gains. India’s strong response came after Pakistan’s outgoing UN envoy Maleeha Lodhi commented on […]