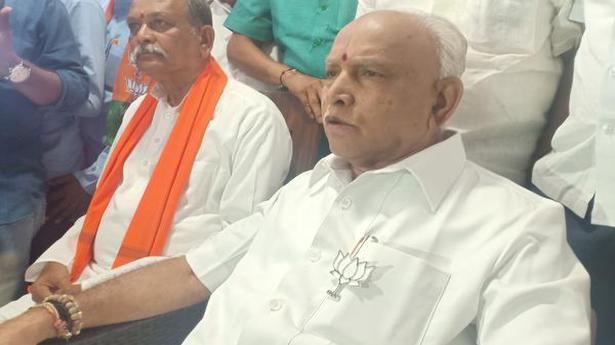 State BJP President B. S. Yeddiyurappa, while refuting the charge levelled against him by Congess chief Rahul Gandhi as false and baseless, has demanded an apology from him if he failed to prove the charge.

“Rahul Gandhi accusing me of giving around ₹1,800 crores to several senior BJP leaders, including L. K. Advani, Arun Jaitley, relying on a false information, does not suit the post he holds”, Mr .Yeddiyurappa said while talking to press persons here on Tuesday.

“If Mr. Rahul proves the charge I will retire from active politics. If he doesn’t then he should tender an apology in public”, he said.

He also criticised Mr. Gandhi of giving false assurances to people on waiving off farm loan. According to him the coalition government in the State, which had announced to waive off farm loans to the tune of ₹46000 crore, has failed even after nine months in office.

“In a span of five years the popularity of Prime Minister Narendra Modi has increased because of his good administration, that helped development of the country and welfare of people and we are confident of winning over 300 seats across the country including 22 in Karnataka”, he said.

Tribal communities of Hunsur have urged the government to celebrate Birsa Munda Jayanti on the lines of similar events held to commemorate various personalities. A resolution was passed by various tribal NGOs at Hunsur after observing the 144th birth anniversary of Birsa Munda, who was a tribal leader and who died fighting against the British […]

The Congress has challenged the Central government to order an investigation by the newly-appointed Lokpal into the ‘Yeddyurappa Diaries’ published by a news magazine. The Caravan on Friday published a report alleging that former Karnataka Chief Minister B.S Yeddyurappa paid as much as ₹1,800 crore to top BJP leaders, including L.K. Advani, Rajnath Singh and […]

The Bharatiya Janta Party has caught the ruling Congress off guard in Rajasthan by fielding expelled Congress leader Sushila Sigra for the Mandawa Assembly byelection. Two rival groups in the Jhunjhunu district unit fighting for dominance in the Jat-dominated seat have added to the misery of the Congress. Mandawa, falling in the Shekhawati region, was […]