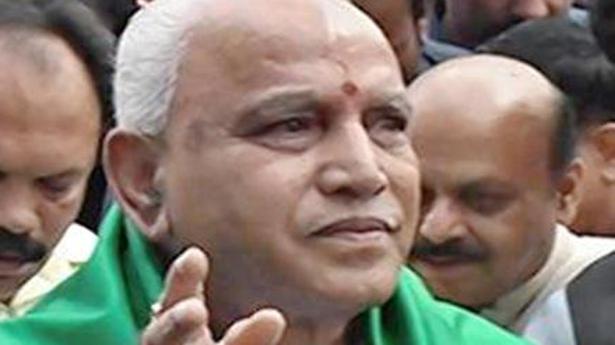 Karnataka Chief Minister B.S. Yeddyurappa said on Sunday that he was hopeful of a “positive” judgement, ahead of the Supreme Court hearing the rebel Congress-JDS MLAs’ plea. Mr. Yeddyurappa rushed to Delhi to meet BJP chief Amit Shah and strategise after the Election Commission announced bypolls in the Seats represented by the rebel lawmakers who were disqualified by speaker K.R. Ramesh Kumar under the tenth schedule.

The Chief Minister is under pressure from the 15 disqualified MLAs who fear jeopardising their political career if the apex court does not give them relief before September 30, the deadline which the Election Commission has set for filing nomination for the bypolls.

The Supreme Court will be hearing their plea on Monday. “We are hopeful of a positive Supreme Court verdict…Since the speaker has not followed principles of natural justice, the judgement would be in our favour. Let’s see what happens tomorrow,” Mr. Yeddyurappa told reporters after meeting Mr. Shah.

“We are expecting [the] verdict in our favour as the EC has announced dates for bypolls in the State,” he said.

Karnataka Home Minister Basavaraj Bommai on Sunday also met some of the disqualified MLAs, including R. Shankar and S.T. Somashekar, who are stationed in New Delhi, sources said.

He informed them about the meeting between Mr. Shah and Mr. Yeddyurappa and assured them that the Party will be by their side, the sources said.

The Speaker’s disqualification order states that the rebel MLAs cannot participate in the proceedings of the current Vidhan Sabha, because of which they are now pinning all hopes on the Supreme Court. Unless the court stays the order or gives relief to them, they are prohibited from even contesting the bypolls.

The 15 Assembly segments will go to polls on October 21 and counting of votes will be held on October 24. Seven of these are in north Karnataka.

Bypolls to two Assembly constituencies — Maski in Raichur district and RR Nagar in Bengaluru — have not been announced as cases related to the 2018 election are pending in the Karnataka High Court.

The bypolls are crucial for the stability of the BJP government as the Party has 104 MLAs (excluding the Speaker) in the 207-member Assembly and it has to win at least ten Seats to take its tally to 114, the simple majority mark in a full House of 224 members.

What could make the task not so easy is the fact that the Congress and the JDS too will be making all-out efforts to retain their ground, especially in the constituencies that were represented by them before their MLAs turned rebels.

The Trinamool Congress (TMC) has announced names of four of its leaders for the Rajya Sabha election on Sunday. Two of the four nominees are women, which is a matter of pride on International Women’s Day, noted party’s chairperson and Chief Minister Mamata Banerjee. Mamata Banerjee announced the names on Twitter. “I am glad to […]

Inter-State movement of people, goods will not be restricted Source: thehindu.com Related