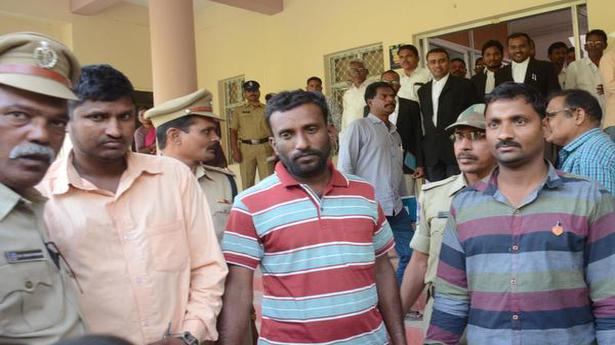 The three accused in the gruesome Yellapatar gang rape and murder case were awarded death penalty on Thursday by the designated Special Court for speedy trial.

Adilabad District Judge M.G. Priyadarshini, who is also the in-charge Judge of the Special Court, found the crime to be of the ‘rarest of rare’ kind before delivering the judgement.

The sentence, hanging until death, will have to be confirmed by the Telangana State High Court. The Judge provided a 30-day period to the accused to prefer appeal before the High Court.

The accused, Shaik Babu, Shaik Shabuddin and Shaik Maqdoom, were also fined a of ₹26,000 cumulatively for other minor offences. It took only about 45 days from the date of filing of charges for the Special Court to pronounce judgement in what had become a sensational issue in the State.

A 30-year-old Scheduled Caste woman belonging to the backward Beda Budiga Jangalu caste, who earned her livelihood by bartering utensils for discarded human hair and selling balloons, was gang raped and brutally murdered by the trio on November 24 last year between Ramnaik tanda and Yellapatar habitations in Lingapur mandal.

“The police arrested the three accused on November 27 as investigations led towards them and the accused were remanded in custody immediately,” KB Asifabad Superintendent of Police M. Malla Reddy recalled as he briefed the media after the judgement was delivered.

The case attracted considerable attention in the wake of a similar incident which took place in Hyderabad a few days later. A Special Court for speedy trial was designated on December 11 and the police filed an almost 100-page charge sheet on December 24.

The trial began on December 27 as the prosecution examined witnesses. The court appointed advocate A.A. Rahim as State Brief for the accused.

The prosecution had cited 44 witnesses and produced circumstantial evidence based on DNA reports and reports on blood and semen of the accused. The Judge found the accused guilty of the offence and awarded the sentence.

Jadavpur Association of International Relations plans to source handcrafted goods — artworks to clothes — from villages and sell them on a dedicated website. Source: thehindu.com Related

Karnataka Congress leader D.K. Shivakumar, arrested in a money laundering case by the Enforcement Directorate (ED), moved the Delhi High Court on Thursday seeking bail. Mr. Shivakumar has challenged the trial court’s Wednesday order by which his bail plea was dismissed. The ED had in September last year registered the money laundering case against Mr. […]

Congress president Rahul Gandhi’s declaration that the poorest families in the country will be given ₹72,000 annually is nothing but an eyewash just like Prime Minister Narendra Modi’s ₹15 lakh deal, Finance Minister T.M. Thomas Issac has said. ‘‘We welcome all schemes benefiting the poor, but cheating them with impractical promises is not acceptable,’’ he […]