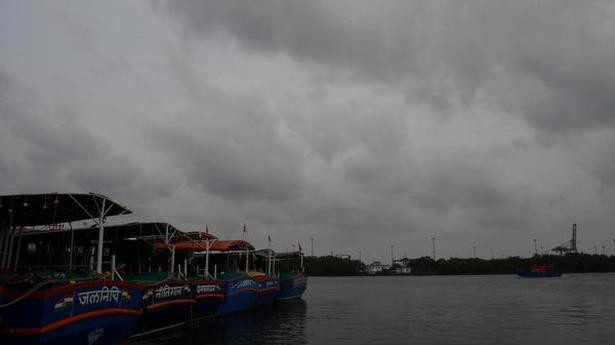 With Cyclone Fani (pronounced ‘Foni’) set to intensify into a severe cyclone in the Bay of Bengal, Kerala also can expect widespread rainfall over the next few days. On Monday and Tuesday, the State is likely to experience lashing winds with speeds touching 30-40 kmph and gusting to 60 kmph.

According to a 2 p.m. update on Sunday, Cyclone Fani lay 1040 km south-east of Chennai and 1210 south-southeast of Machilipatnam (Andhra Pradesh).

The cyclonic weather formation is expected to move northwestwards till the evening of May 1 and thereafter re-curve gradually on a north-northeastward path.

Special Correspondent adds from Kochi: Indian Coast Guard ships and aircraft have begun issuing weather warning to fishermen on board boats and directed them to enter the nearest port, in the wake of Kerala State Disaster Management Authority issuing an advisory following the formation of a cyclone in Bay of Bengal.

The warning is being issued through long-range loud hailers and on marine radio broadcast, says a Coast Guard press release issued here on Sunday.

All boats that we encountered at sea along Kerala coast and Lakshadweep Islands have been advised to enter the nearest port as soon as possible. Weather broadcast is also being given through Coast Radar Station, in Malayalam, Tamil, Hindi and English, the release said.

The Central Bureau of Investigation (CBI) has approached the office of Lok Sabha Speaker Om Birla for sanction to prosecute three Trinamool Congress MPs and one former parliamentarian in the Narada News sting operation case, said the agency on Thursday. A CBI official said the approval had been sought with respect to MPs Saugata Roy, […]

Start-ups, entrepreneurs in Mysuru to get funding