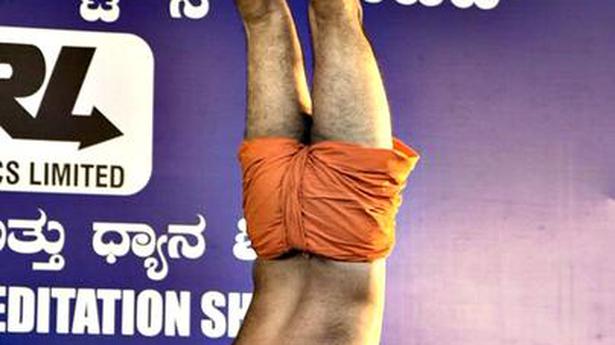 A five-day yoga camp by yoga guru Baba Ramdev got off to a grand start on Thursday with several yoga enthusiasts of different age groups and from different walks of life turning up at the venue despite the chilly weather.

Baba Ramdev demonstrated various yogasanas and delivered short discourses during the first day programme, which stretched for over two-and-a-half hours.

During the programme, a pledge to make the world disease-free through yoga was made.

Emphasising the need for a ban on tobacco products, Baba Ramdev said that if ban was imposed, there would be no poverty in India. “Yoga has no caste or religion. It is a science. If you adapt this science in your life, diseases will not come near your,” he said.

Inaugurating the camp, Gurusiddha Rajayogindra Swami said that yoga was more important than food and water. “For a peaceful, contented and disciplined life, practising yoga is important,” he said. The seer lauded the efforts of Baba Ramdev in popularising yoga at a global level.

Chairman of VRL Group Vijay Sankeshwar said that good practice of yoga keeps diseases away. He stressed the need for launching a campaign against consumption of tobacco and gutka.

Recalling Baba Ramdev’s visit to Hubballi 12 years ago, Mr. Sankeshwar said that following his visit, yoga practitioners had increased and their number was in lakhs now. Through Yoga Day, Prime Minister Narendra Modi had further popularised yoga, he said.

Mr. Sankeshwar, who has been honoured with the Padma Shri award, was felicitated by Baba Ramdev and Gurusiddha Rajayogindra Swami.

The organisers said that free bus services were being provided for those participating in the camp at the Railway Sports Ground and the buses from various localities would be available from 4 a.m.

The Supreme Court on April 10 refused to grant bail to Rashtriya Janata Dal (RJD) chief Lalu Prasad Yadav in the fodder scam case. “We don’t think we will release you on bail,” Chief Justice Ranjan Gogoi told Yadav’s counsel and senior advocate Kapil Sibal. “Why? This is most unfortunate,” Mr. Sibal expressed his chagrin. […]

TTD to conduct COVID test for all pilgrims

Staff told not to shift their duty areas for a week Source: thehindu.com Related

Ensure presence in Parliament to back Bills, says Amit Shah to BJP MPs

Noting that the Opposition has been pressing for a division of votes during the passage of many Bills, BJP president Amit Shah told party MPs on Tuesday to ensure their presence in Parliament so that draft legislations are backed by maximum number of lawmakers. Addressing the BJP parliamentary party meeting, Mr. Shah also asked MPs, […]