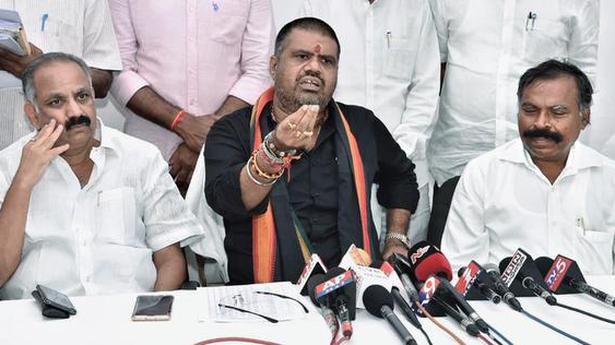 Instead of reviewing the party’s worst-ever defeat in the elections during his two-day visit, Mr. Naidu adopted the single-point agenda of criticising the YSRCP government, which, they said, was taking several decisions and implementing the election manifesto for the welfare of people.

Mr. Naidu still had MLAs on his side because Mr. Jagan Mohan Reddy took a principled stand not to encourage defections, the Minister said. Because of the attitude of Mr. Naidu, the TDP leaders were getting involved in cases, he alleged.

Condemning the criticism of Mr. Naidu against the police, VMRDA Chairman Dronamraju Srinivasa Rao recalled how Mr. Jagan Mohan Reddy was not even allowed to move out of the runway at the airport during the TDP rule.

MLAs U.V. Ramana Murthy Raju and Tippala Nagi Reddy said the outbursts of Mr. Naidu were motivated as he was unable to digest the unparalleled development programmes being implemented by the YSRCP government.

Women’s rights groups and feminists have reiterated their opposition to death penalty, asserting that it is not a deterrent against crimes. “We understand the inexorable pain of the parents and other loved ones of women and children who are raped and, in many cases, killed. However, efforts by politicians and parties, courts and other vested […]

Deputy Chief Minister Ajit Pawar has said that while his uncle and NCP president Sharad Pawar was the chief minister four times, he also had “somehow” become the deputy CM as many times. He was speaking at a function in Baramati, his constituency, in Pune district on Saturday. “I am a party worker who has […]