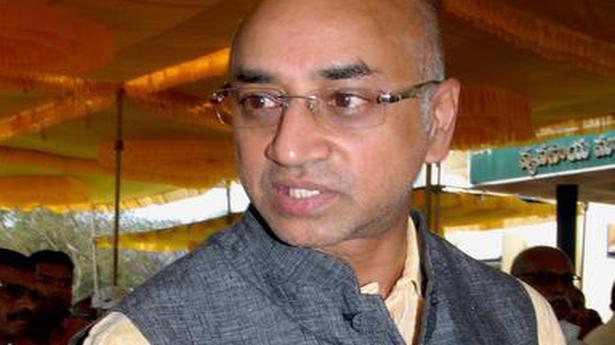 Telugu Desam Party MPs Galla Jayadev and Kanakamedala Ravindra Kumar on Thursday alleged that YSRCP MPs V. Vijaya Sai Reddy and P. Midhun Reddy tried to stifle their voices when they raised the issues of three capitals and the abolition of the Legislative Council at the all-party meeting convened by Prime Minister Narendra Modi in New Delhi in preparation for the Budget session of Parliament.

Addressing the media after the all-party meeting, Mr. Jayadev and Mr. Kumar said the YSRCP MPs became quiet only after Defence Minister Rajnath Singh made it clear that members were free to express their opinions on any issue and that the YSRCP would also be given an opportunity to articulate its views.

Mr. Jayadev said he brought up the obligations of the Central government to Andhra Pradesh as per the reorganisation Act and the farmers who made huge sacrifices for the State capital, and that a discussion be allowed in the session on these subjects. The MP said he also spoke about the way the people of Amaravati were being robbed of their democratic rights.

He said a privilege motion should be moved against those who arrested him when he was protesting peacefully.

Mr. Kumar said a request was made to the Centre to come out with a uniform policy for Legislative Councils. The recommendation of the standing committee of government departments in Rajasthan was taken to the notice of meeting, he added.

Mired in litigation and controversy over faulty answer keys, the delayed process leaves many in despair Source: thehindu.com Related

With only a few days remaining for the campaigning, candidates and political parties are leaving no stone unturned to reach out to the voters and woo them in various constituencies in and around the city. With the major parties, the TDP and the YSRCP finally releasing their manifestos, the candidates are trying to take forward […]