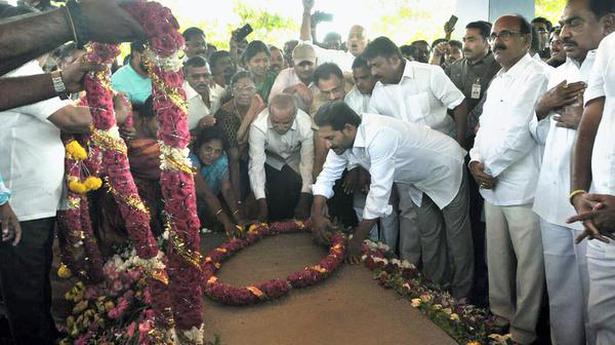 The Yuvajana Sramika Rythu Congress Party (YSRCP) released the list of candidates for all 175 Assembly constituencies and 25 Lok Sabha constituencies on Sunday.

Party president Y.S. Jagan Mohan Reddy released the list after paying homage to his father and former Chief Minister YS Rajasekhara Reddy at their family estate in Idupulapaya in Kadapa district. “Of the 25 Lok Sabha candidates, seven were from the Backward Classes, four Scheduled Castes and one from Scheduled Tribes. Among the 175 candidates, 41 belonged to the BCs and five to the Muslim community,” he said.

Mr. Jagan would contest from the Pulivendula Assembly constituency. Former Ministers Kolusu Parthasarathy, Botsa Satyanarayana, Dharmana Prasada Rao and Tammineni Sitaram would contest from Penamaluru, Chipurupalle, Srikakulam and Amudalavalasa constituencies respectively. Contrary to speculation that a BC candidate/weaver community leader would be fielded from Mangalagiri, the party fielded sitting MLA Alla Ramakrishna Reddy. Velampalli Srinivas would be in fray from Vijayawada (West) though there was speculation initially that a Muslim would be nominated against TDP’s Shabana Khatoon, daughter of sitting MLA Jaleel Khan.

Mr. Jagan accommodated most of the TDP leaders who switched loyalties to the YSRC. Anam Ramanarayan Reddy and Amanchi Krishna Mohan would contest from Venkatagiri and Chirala constituencies respectively. Muthamsetti Srinivasa Rao (Avanti Srinivas) would contest from the Bhimli Assembly constituency and Modugula Venugopal Reddy, TDP MLA who recently joined the YSRC, from the Guntur Lok Sabha seat. Former MP Vanga Geeta and MLC Magunta Srinivasulu Reddy, who joined the YSRC on Saturday, were being fielded from Kakinada and Ongole Lok Sabha seats respectively.

India’s second mission to the Moon, Chandrayaan-2, will be launched on July 15, Indian Space Research Organisation (ISRO) Chairman K Sivan announced on Wednesday. The mission will be launched at 2.15 am from Sriharikota. The mission includes a lander and rover for the first time in an Indian space mission. The moon landing is planned […]