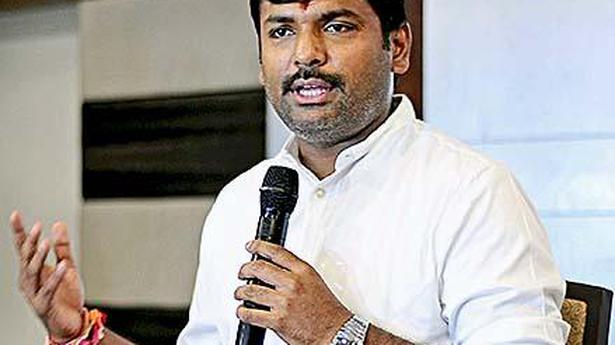 Having stomed to power with a landslide victory, the YSR Congress Party (YSRCP) that has been alleging ‘sloppy investigation’ by the TDP government into the land scam in Visakhapatnam district is likely to order a fresh probe.

“Not only Visakhapatnam land scam, the land deals made by the Capital Region Development Authority (CRDA) are marred in irregularities. Our government will order a high-level probe into all the misdeeds reported during the TDP tenure at office,” MLA-elect from Anakapalle Assembly segment Gudivada Amarnath told the media here on Sunday.

He said that the land scam was big in nature and the statement by an IAS officers holding the rank of Collectors that some files were lost during Cyclone Hudhud in October, 2014 itself had indicated that several big wigs were involved in it.

“The TDP government did not put the report submitted by the Special Investigation Team (SIT) on public domain and it tells all about its commitment to a fair probe into the scam,” he alleged.

Referring to the promise made by the YSRCP to fight for Special Category Status (SCS) to Andhra Pradesh, Mr. Amarnath said the party, with 22 MPs in its kitty, would continue to bring pressure on the Centre to grant the SCS. He accused caretaker Chief Minister N. Chandrababu Naidu of diverting funds allotted to backward districts under the special package.

Promising to fulfil his promise of reviving Tummapala Cooperative Sugar Factory, Mr. Amarnath said during the padayatra, YSRCP chief Y.S. Jagan Mohan Reddy had promised to bailout the workers and it would happen for sure.

Coming down heavily on Jana Sena Party (JSP) president Pawan Kalyan, he alleged that the actor-turned politician had accepted funds from Mr. Naidu to field candidates to weaken the prospects of the YSRCP. “Now, the voters have made him (Mr. Pawan) realised that Mr. Jagan is the real hero,” he said.

The YSRCP leader also thanked former Minister Dada Veerabhadra Rao, the party activists for supporting him and promised to work hard for development of the constituency.

Union Commerce Minister Piyush Goyal on Wednesday told the Lok Sabha that the government was negotiating with the U.S. the issue of withdrawing the Generalised System of Preferences (GSP) status to Indian business houses. The Minister said the process of negotiations should be left to “those in the room who are handling the talks”, but […]

“Cancel your journeys if not urgent, and please stay back in your homes. Do not move in public places and maintain self isolation to prevent the spread of dreaded Coronavirus. The virus spread in over 160 countries killed more than 11,000 persons.” This was the message being aired at bus and railway station in wake […]