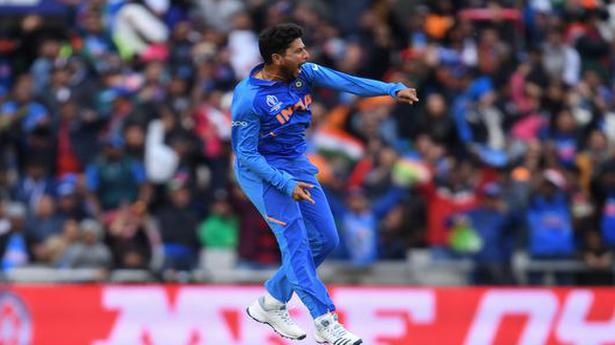 Sunday’s adrenaline-sprinkled but rain-marred World Cup clash between India and Pakistan at Old Trafford, had entered a decisive phase. Pursuing 336, Sarfaraz Ahmed’s men needed a pivotal partnership and Fakhar Zaman and Babar Azam were precisely doing that, nudging the single, blocking the good deliveries and slamming the loose ones.

Kuldeep Yadav then steps in. A gentle amble leads to a whirring left arm and as the delivery curves and dips, Babar stays rooted to the crease, his legs and bat are not in sync and through the gap the white ball slides in and knocks the stumps. The bails light up, M.S. Dhoni roars and Kuldeep, the Chinaman spinner, is back in vogue. Then he scalps Zaman too and with his two for 32 yield, Kuldeep had prised out Pakistan’s heart.

Later, speaking to the media in the ICC mixed zone, Kuldeep recalled Babar’s wicket: “It is my first World Cup match against Pakistan, so the expectations were a lot. The ball I bowled was a dream ball. The team needed a wicket because Pakistan was in the middle of a good partnership. Babar and Fakhar bat well against spinners, rotating the strike and attacking when needed. Babar is a good player of spin. Taking his wicket was very important and when Fakhar got out almost immediately, they came under pressure.”

Kuldeep’s effort finally yanked him out of a middling show in recent times. In the Indian Premier League, turning out for Kolkata Knight Riders, he played nine games, bagged a mere four and had an economy rate of 8.66. In the World Cup, he had a one for 46 against South Africa and a none for 55 while facing off with the Aussies. By his high standards — an overall tally of 90 wickets in 47 ODIs, the latest skid looked even more pronounced.

Thankfully, the Uttar Pradesh spinner regained his sizzle against Pakistan. Explaining his recent performances, Kuldeep said: “I have been bowling well from the first match, I don’t ever doubt my skills. This is a 50-over game, it is a very long format, it is not like a T20.

“Sometimes you bowl well and can still get hit, you may not get wickets. So at that time, it is very important to back yourself. In the match against Australia, I kept the scoring in check. Although I didn’t get wickets, their required rate kept going up. When the ball leaves your hand nicely and slowly, the wickets also start coming.”

With Kuldeep seemingly back in the groove and striking a tandem with fellow spinner Yuzvendra Chahal, India has an advantage in the middle-over battles.

Pace ace Jasprit Bumrah, who has been out of action for four months due to a lower back issue, was the centre of attention of the Indian team’s coaching staff as he toiled for about 45 minutes at the ACA Barsapara Stadium here on Friday. The 26-year-old, who last donned India colours in an away […]

Former India captain Sunil Gavaskar feels wicketkeeper-batsman M.S. Dhoni won’t be part of India’s T20 World Cup squad. Team has moved on The multi-national event is scheduled to be played in Australia later this year and Gavaskar believes Team India has moved on from Dhoni and his presence in the squad for the showpiece tournament […]

England’s Rory Burns added just eight runs to his overnight total as the hosts lost four wickets in the morning session on day three of the first Ashes test as they reached 328-8, with a first innings lead of 44 runs at Edgbaston. Resuming on 267-4, England World Cup hero Ben Stokes reached his 18th […]