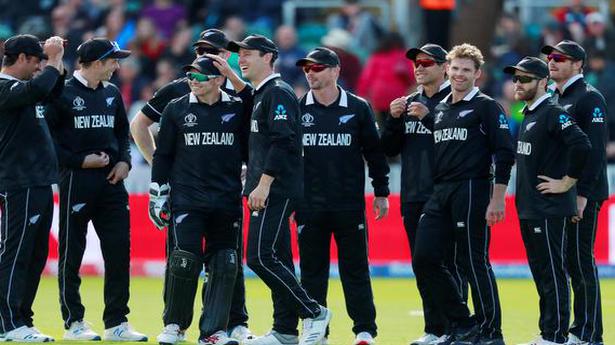 Neesham turned the game in New Zealand’s favour with his impressive spell after Afghanistan briefly threatened to rock the Black Caps.

New Zealand, World Cup runners-up in 2015, have to make 173 from their 50 overs to extend their unbeaten start to three matches.

Hashmatullah Shahidi (59) top-scored for Afghanistan, who are fighting to avoid a third successive defeat.

With Mohammad Shahzad ruled out for the rest of the tournament due to a knee injury, the onus was on Hazratullah to anchor the Afghanistan innings and he made a flying start with three fours off Matthew Henry’s opening over of the match.

On the small west country ground, the free-hitting Afghanistan’s openers were doing their best to rattle New Zealand as they reached 66 in the 11th over.

But Neesham made the crucial breakthrough when Hazratullah went for one big shot too many, the left-hander hitting to Colin Munro at deep cover to depart for 34.

New Zealand had two wickets in the space of three balls as Noor Ali (31) was strangled down the leg side by fast bowler Lockie Ferguson, who would finish with four wickets.

Afghanistan lost their third wicket with the score still on 66 when Rahmat Shah was dismissed for a duck after a leading edge off Neesham was held by Martin Guptill.

When Gulbadin Naib failed with a review attempt to overturn his edge behind off Neesham, Afghanistan had lost four wickets for four runs in 21 deliveries.

Play was halted due to rain with the score on 84-4 and although the teams returned when the weather relented 25 minutes later, another shower forced them off just two overs later.

After the rain at last disappeared, Neesham shattered Afghanistan’s resistance when he had both Mohammad Nabi and Najibullah Zadran caught behind to leave them 109-6 and earn his first five-wicket haul in ODIs.

By the time Rashid Khan was bowled when a Ferguson bouncer hit his helmet and cannoned onto the stumps, it was clear that aggressive New Zealand had imposed their will.

Mohammad Nabi to retire from Test cricket after Bangladesh match

Former Afghanistan captain Mohammad Nabi has announced his decision to retire from Test cricket after the ongoing one-off match against Bangladesh. The 34-year-old seasoned all-rounder, who has featured in three Test matches for Afghanistan, including the landmark maiden game against India last year, will continue to play white-ball cricket. He wants the country’s youngsters to […]

Spinner Rashid Khan claimed five wickets to put Afghanistan in sight of their maiden Test victory after bowling out Ireland for 288 on day three of the one-off game on Sunday. Chasing 147 to win, Afghanistan were 29 for one at stumps. Ihsanullah Janat, on 16, and Rahmat Shah, on 11, were batting at close […]

Leg-spinners are the trend in modern T20: Ponting

The story of spinners of all variety in 11 IPL seasons has been most fascinating. Those who practise the unnatural and hence difficult art of leg-spin have been the most successful in comparison with the right and left-arm finger spinners. At the pre-match interaction with the media here at the Wankhede Stadium, Delhi Capitals coach […]