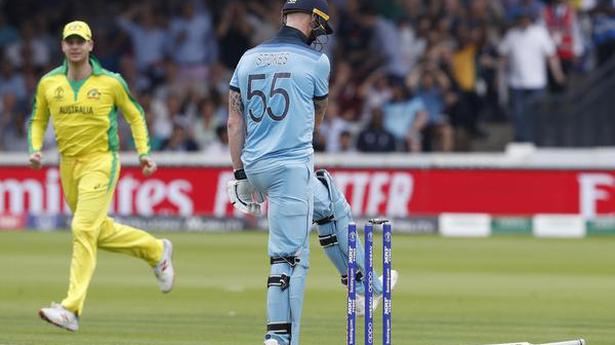 England all-rounder Ben Stokes insists that back-to-back losses have not hampered their hopes of winning a maiden World Cup trophy. After a relatively promising start to their World Cup campaign, England suffered consecutive losses to Sri Lanka (by 20 runs) and Australia (64 runs) to find themselves in a precarious position.

It was once again an unsuccessful chase that proved their undoing as Australia’s 285/7 was more than enough when left-arm seamers Jason Behrendorff and Mitchell Starc took nine wickets between them.

England have slid to the fourth position in the 10-team standings with eight points from seven games. The hosts now have two tough games remaining against India on June 30 and New Zealand on July 3.

“This is our World Cup. We’ve had great support over the last four years and we know how much the World Cup means to fans and we know that as players as well. It’s one of the biggest times and greatest times to be a cricketer, which is to represent your country at a World Cup,” Stokes said after the defeat against Australia on Tuesday.

“But we are not going to take a backwards step and, as I’ve said, this is our World Cup and we are going to go about it how we want to,” he added.

In both the defeats against Sri Lanka and Australia, Stokes played a fine hand and very nearly got England home with knocks of unbeaten 82 and 89 respectively.

“I think it’s just disappointing, losing. Everyone tries to go out there and play knocks to get over the line for the team. It always feels nice getting runs and stuff like that, but it counts for nothing when you can’t get over the line,” said Stokes.

“But normally we have two or three guys in the order who can do that. We have to really dig deep in these last couple of games here, not go back on how we know we play well.”

Incidentally the losses against Sri Lanka and Australia were England’s first back-to-back defeats in ODIs on home soil since 2015.

England now face a daunting task of upstaging India in their penultimate league game to keep their semifinal hopes alive.

“I think we just need to take these last two games as they come. It could be completely different conditions to what we faced here. We know what we are going to do going in with our plans and then it’s all about adjusting once the game starts,” Stokes said.

“We’ve got a great record against India in England, but we’ll just have to wait and see what conditions we’re faced with, but they are another team who are in good form, so hopefully we can bring our best game.”

England captain Eoin Morgan feels not sticking to their “batting mantra” has cost them back-to-back defeats.

“Both this game and the last, we struggled with the basics of what we call our batting mantra,” said the England captain after the loss here on Tuesday.

“Strong intent, building partnerships, and doing it in our own way – we haven’t done those for long enough periods of the game in order to either chase down 230 or chase down 280, and that’s disappointing.

“Our mantra is always evolving – if you’ve watched the last two years of the way we’ve played, it has evolved a lot.”

Starc and Behrendorff ripped through England’s deep batting line-up while the home team’s pacers failed to find the right length on a helping pitch after Morgan opted to field.

“Early on they bowled well. Being 20/3 obviously creates a bigger challenge, especially chasing 280. To make those inroads – I thought they bowled well. Normally when we lose games of cricket, we go back to what we do well. We’ll still strive to do that for Sunday’s game against India.

“They (hopes of reaching the semi-finals) are still strong. The chances are in our hands. Everything is within our control. We just need to produce a performance worthy of winning either one or both of the next two games.

Left-arm Pakistan pacer Mohammad Amir on Friday announced his retirement from Test cricket. He, however, said that he will continue playing white-ball cricket for Pakistan. In a statement issued by the Pakistan Cricket Board (PCB), Amir said: “It has been an honour to represent Pakistan in the pinnacle and traditional format of the game. I, […]

Bangladesh shot out for 233 by Pakistan on opening day

Lanky paceman Shaheen Afridi took four wickets to help Pakistan dismiss Bangladesh for a paltry 233 on the opening day of the first Test here on Friday. Shaheen recorded figures of four for 53 in 21.5 overs and was ably assisted by fellow pacer Mohammad Abbas (two for 19) and spinner Haris Sohail (two for […]

The door opens for Shahbaz Nadeem

Three days ago, Shahbaz Nadeem was at the Alur grounds just outside Bengaluru, turning out for Jharkhand in the Vijay Hazare Trophy. On Saturday, he became India’s 296th Test cricketer, incredibly handed a debut on his home ground. Nadeem was added to the squad late on Friday, after Kuldeep Yadav complained of pain in the […]